Khalilzad in Islamabad for talks on new Afghan peace plan 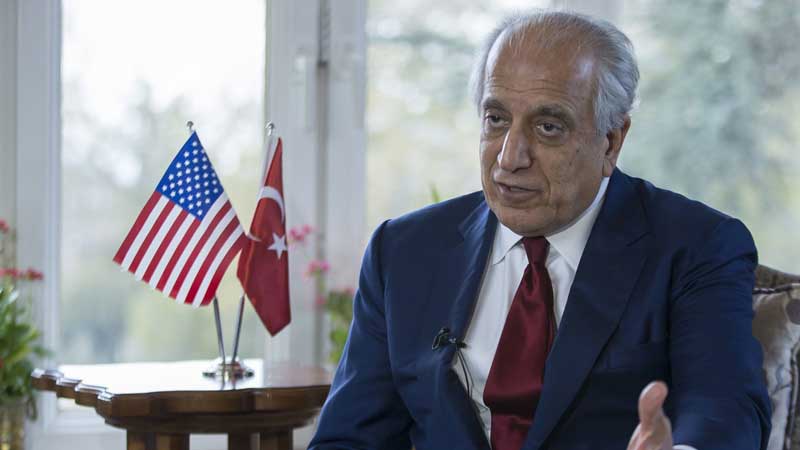 US Special Representative for Afghanistan Reconciliation Zalmay Khalilzad is expected to visit Pakistan on Monday for talks on his new peace plans, his first visit to the country in the Biden administration, sources said on Sunday.

Khalilzad will be meeting with civil and military leaders in Islamabad days after his visit to Qatar and Afghanistan where he has reportedly shared a US plan about a ‘participatory government’ as the Taliban and the Kabul’s team have not yet reached agreement on a future political system.

Taliban have not commented on the reported plan, however, Afghan President Ashraf Ghani, in a veiled response to Khalilzad’s plan, told the parliament on Saturday that Afghanistan’s constitution will decide on the future administration, not plans made by ‘others’.

Addressing a ceremony on the inauguration of the third year of the 17th legislative term of the National Assembly on Saturday, Ghani said the transfer of power will happen through an election as an unchanging principle for the government, according to Bakhtar news agency. Ghani also assured the assembly that no decision will be made in absence of continued consultation with the people as well as without the direct role and approval of all layers of Afghan society. He added that he is ready for sacrifice for peace, but it will not lead to the loss of the last decades’ achievements. The Afghan president also called on Pakistan to choose a ‘right path’, saying, “Let’s accept each other as two independent countries.”

Khalilzad has held talks with the Taliban political representatives in Qatar and the Afghan leaders in Kabul over the past few days on options on how to push the fragile peace process forward as there has been no progress since the Taliban and an Afghan government team started negotiations on Sept 12. Days earlier, Khalilzad travelled to Kabul where, according to Afghan media, he shared the US proposals for an interim set-up and an international conference to discuss all issues relating to political settlement. “We presented ideas to help accelerate the process. We need to get to a power sharing and ceasefire agreement,” a US source privy to Khalilzad’s discussions in Kabul and Qatar told Daily Times. “Ultimately Afghans will have to decide how to set up power sharing: executive, legislative, judicial system,” he said, adding that the US side gave some ideas plus how to negotiate one. “But both sides have to want it. So still early days,” he further said.

Khalilzad is believed to have shared his proposals with the Taliban when he met them in Qatar on Friday evening. Taliban spokesman Mohammad Naeem said Khalilzad did not provide details of the meeting and said head of the political office Mullah Abdul Ghani Baradar, head of the negotiation team Shaikh Mawlavi Abdul Hakeem and the accompanying delegation met Khalilzad and the US commander in Afghanistan General Scott Miller and their team. “Both sides expressed their commitment to the Doha agreement and discussed its full implementation. Likewise, the current situation of Afghanistan and the rapidity and effectiveness of the Intra-Afghan negotiations were discussed,” the Taliban spokesman tweeted.

Earlier, Khalilzad met members of the government’s negotiations team in Doha after his meetings with the Afghan leaders in Kabul. The US envoy described his Kabul three-day visit as ‘productive’ during which he met President Ashraf Ghani, Chairman of High Council for National Reconciliation Dr Abdullah Abdullah and political leaders and discussed his plan to end the war in Afghanistan.

Khalizlad in a series of tweets said he held three days of consultations in Kabul with government officials, civil society and women leaders, and other Afghan political figures. “With all parties, I outlined our focus on Afghanistan, diplomacy, and garnering wider international support in order to help Afghans make more rapid progress on the peace process,” he said.

The US envoy urged the Afghan government and the Taliban must find a path to a political settlement and a permanent and comprehensive ceasefire. “In Kabul, I discussed various options/alternatives to propel the process forward. I was encouraged by what I heard. There is widespread support for the need to move more quickly and deliver a just and durable peace that Afghans demand and deserve,” he said.