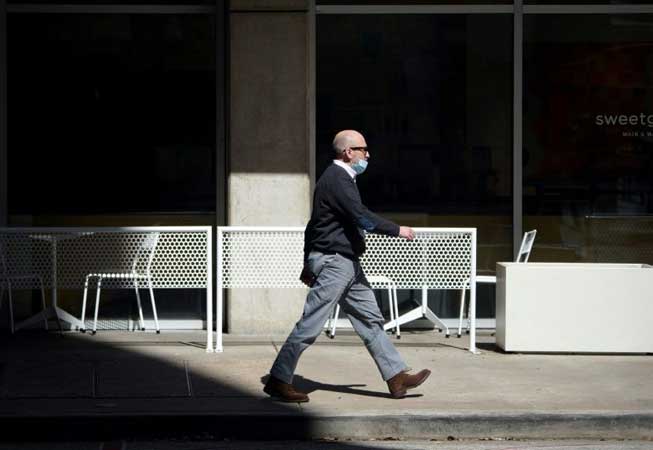 Sipping coffee at a sidewalk cafe in upscale Houston Heights, Evelyne Marcks shakes her head at the Texas governor’s decision to scrap a mask-wearing mandate before the Covid-19 pandemic is under control.

“I don’t know who he is trying to please,” she said, sitting at a table at the Central City Co-Op, “but it’s certainly not people like us from the big cities.”

“He probably wants to please the right-wing people who live in places where, to be honest, there’s no need for a mask,” she added, referring to the roughly four million Texans who live in rural areas.

But some restaurant owners and clients in the state’s largest city, Houston, were perplexed by or even against Governor Greg Abbott’s recent decision to drop the mask mandate “and open Texas 100%” beginning Wednesday.

“We will continue to ask our customers to mask up,” said Jessica Navas, an owner of the Central City Co-Op, which also sells fresh vegetables from area farms.

A fervent defender of eating locally and responsibly, Navas added that the Co-Op’s mask requirement “will continue so long as CDC guidelines recommend it.”

The US Centers for Disease Control and Prevention website currently recommends that “people wear masks in public settings, at events and gatherings, and anywhere they will be around other people.”

Not far from the Co-Op, at the Taco Stand and Burger Joint on Shepherd Drive, Houston Heights’ central avenue, owner Matthew Pak has taken a similar stance.

“We are not going to change anything that we are doing,” he said.

“We are going to require all our staff and customers to wear masks, continue sanitizing, keeping everything extra, extra clean, social distancing as much as we can enforce.”

Those precautions will probably not end soon, he said.

“There’s only a low percentage that have the vaccine” so far, Pak noted. “I mean, none of my staff has vaccine.”

So far, some 4.1 million Texans — 14.2 percent of the population — have received at least one dose of a Covid-19 vaccine.

That figure is about two percentage points below the national average, owing partly to the severe disruptions of the recent historic cold wave in the state.

Farther down the avenue, before an enormous Texas flag painted on the corrugated metal wall of Piper’s BBQ & Beer, co-owner Richard Orozco ponders the position the governor has put him in.

“It’s really a no-win situation for the restaurants,” he said.

“If we choose to enforce the mask policy, there’s going to be vocal critics about that. If we say no mask, there’ll probably be even more vocal critics,” he noted. “It really puts us in a tough spot.”

He and his partners finally decided to let customers decide whether to wear a mask.

At Angela’s Oven, in a quieter, residential part of the neighborhood, owners reached the same conclusion.

The bakery caters to an affluent and international clientele, part of the gentrification transforming parts of northern Houston. Alex Harsema-Mensonides, a Dutch national who works in the natural gas industry, sips on a hot espresso. Angela’s bread and croissants “remind me of my vacations in France,” he says.