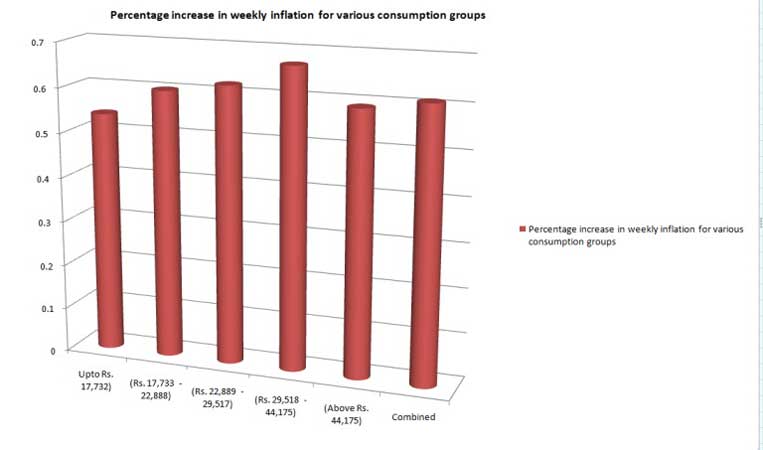 The Sensitive Price Indicator (SPI) based weekly inflation for the week ended on March 4, for the combined consumption group, witnessed increase of 0.61 percent as compared to the previous week. The SPI for the week under review in the above mentioned group was recorded at 147.99 points against 147.09 points registered in the previous week, according to the latest data of Pakistan Bureau of Statistics (PBS).

As compared to the corresponding week of last year, the SPI for the combined consumption group in the week under review witnessed an increase of 14.95 percent. The weekly SPI with base year 2015-16 is covering 17 urban centers and 51 essential items for all expenditure groups.

The Sensitive Price Indicator for the lowest consumption group up to Rs17,732 witnessed 0.54 percent increase and went up from 158.36 points in last week to 159.21 points during the week under review.

During the week, prices of 05 items decreased, 22 items increased while that of 24 items remained constant.

Exports: The exports from the country increased by 4.29 percent during the first eight months of the current fiscal year (2020-21) as compared to the corresponding period of last year, Pakistan Bureau of Statistics (PBS) reported.

The imports during the period under review also increased by 7.49 percent by growing from $31.483 billion last year to $33.840 billion during the first eight months of current fiscal year.

Based on the figures, the country’s trade deficit increased by 10.64 percent during the first eight months as compared to the corresponding period of last year. The trade deficit during the period was recorded at $17.536 billion against the deficit of $15.850 billion last year.

On month-on-month basis, the exports from the country decreased by 4.52 percent during February 2021 when compared to the exports of $2.146 billion in January 2021. Likewise, the imports into the country also decreased by 5.27 percent in February 2021 when compared to the imports of $4.820 billion in January 2021, the data revealed.