Gilani’s win forces PM to go for vote of confidence

* Qureshi says if some of PTI MNAs were not happy, they should not have voted in favour of party’s candidate on woman seat for Islamabad also 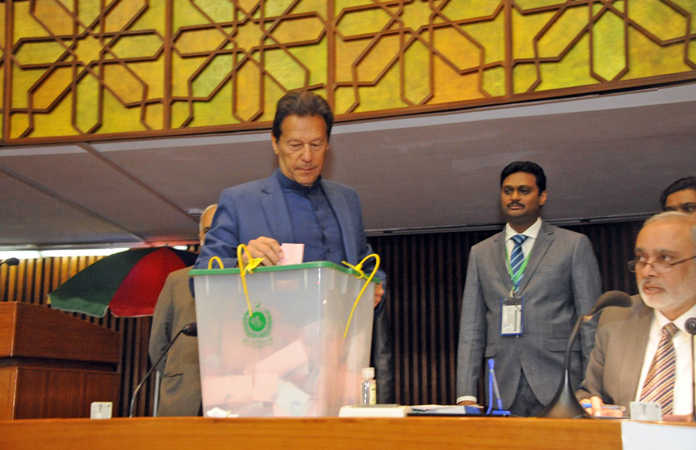 Foreign Minister Makhdoom Shah Mahmood Qureshi on Wednesday said Prime Minister Imran Khan has decided to seek a vote of confidence from the National Assembly, describing the victory of Yousaf Raza Gilani on the general seat of Senate from the federal capital as ‘negation of democracy’.

He said the victory of Gilani has also endorsed Prime Minister Imran Khan’s apprehensions of corrupt practices in the Senate elections. He said the way voting was done on the Capital’s general seat has strengthened the PTI’s narrative about use of money in the Senate elections. “We were apprehensive that the elections will be bought and the buyers of conscience will buy the votes using the name of democracy.”

Qureshi said the PTI’s female candidate elected on the seat of Islamabad taking 174 votes. “However, on the general seat in Islamabad, we were getting signals that Gilani was asked to stand in the election with the assurance that the election will be won for him.” He said every tactic was used to win the election of Gilani, which put a stamp on the narrative of Imran Khan about votes buying.

He said in the last Senate election, when votes were bought in the Khyber Pakhtunkhwa Assembly, the Pakistan Tehreek-e-Insaf (PTI) had stripped its 20 members of their assembly membership. The PTI government had invited the opposition to sit together and undertake a constitutional amendment to stop the buying of votes, he recalled, adding that the opposition did not let the debate happen on the floor of the National Assembly and then voting on the amendment for open voting in the Senate election.

“We filed a reference in the Supreme Court to seek interpretation of law. The apex court in its decision asked the Election Commission of Pakistan to act according to the constitution and hold free, fair and transparent elections of Senate,” Qureshi said, adding that the ECP, however, failed to ensure transparency in the elections and their apprehensions were proved right as the video showing the son of Gilani indulging in buying of votes surfaced on the eve of elections. He said the ECP could have provided the ballot papers for transparent election.

Qureshi said Imran Khan has started a fight to change the political culture and in every field, he has initiated the process of accountability and took the high moral ground. “I want to say to the voter of PTI that the fight for right will continue and finally the right will win.”

He said this was an unfortunate day for democracy as the flag-bearers of democracy negated its values. To a question, he said when Imran Khan would take a vote of confidence from the National Assembly, it would become clear who stands with him and who with the opposition. He said the PTI workers should be confident that the fight against immorality of the opposition would continue.

To another question, Qureshi said Imran Khan gave space to the legislators to express their views, and the legislators, who had voted for Gilani, should have stood up and clearly stated that they were voting for him. If MNAs were not happy then they should not have voted to the PTI on the women seat for Islamabad, he added. “The reason for voting was not their unhappiness but the money.”

The minister said in the Punjab Assembly, the senators were elected with an understanding among the parties but that principle was not adopted in the National Assembly. Those parties, which bought votes, and those members, who sold their votes, should be held accountable, he stressed.

Minister for Science and Technology Chaudhry Fawad Hussain said the PTI was struggling against the system which was bringing those in power who made money in politics and then used it to gain more power.

Adviser to Prime Minister on Accountability Shahzad Akbar said the opposition’s talks about vote of no confidence against the ruling party is their misconception. He said Prime Minister Imran Khan is the only political leader who took strict action against his own party parliamentarians who were involved in malpractices during the last senate elections. He said corruption and usage of money has played role regarding Yousaf Raza Gilani’s victory in the Senate elections as the whole nation has witnessed that how his son Ali Haider Gilani was buying votes from the members of the ruling party in a video which was aired by all media channels.