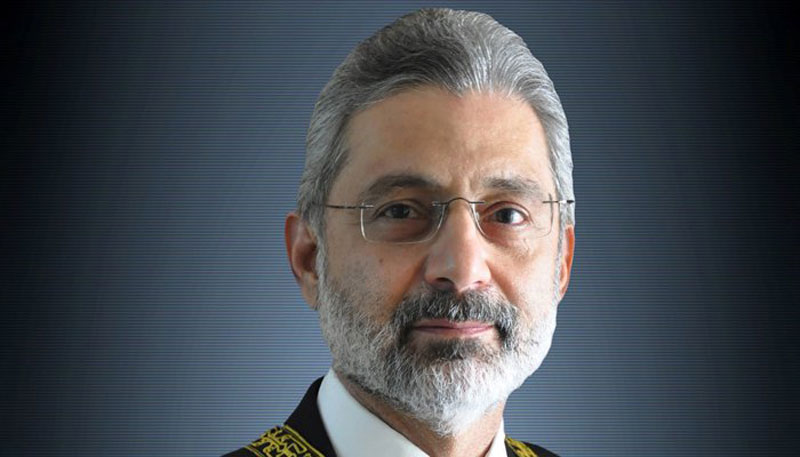 While adjudicating a review petition of their brother judge Justice Qazi Faez Isa on Wednesday, a 10-member bench of the top court issued notice to the federal government over possibility of live transmission of the proceeding of the matter.

On June 19, 2020, seven judges of a the present 10-judge bench have quashed a presidential reference against Justice Isa but also ordered the Federal Board of Revenue (FBR) to conduct an inquiry into the judge’s family members’ foreign assets and submit a report to the Supreme Judicial Council (SJC).

Pleading his own case before a 10-member bench for revisiting the order, the sitting judge of the top court Justice Qazi Faez Isa requested for a live broadcast of the proceedings in the matter.

Justice Umar Ata Bandial is heading the 10-member bench. During the course of hearing, a member of the bench Justice Syed Mansoor Ali Shah observed that science and technology should be welcomed to bring transparency to the justice system.

During the course of hearing, Justice Isa contended that two members of a bench could negate administrative decisions taken by the full court, saying a decision by the 10-judge larger bench cannot be overturned by a full court from the administrative view.

Justice Mansoor Ali Shah remarked that science and technology have played a great role in improving and ensuring transparency in the system and referred to innovation in DNA research, as hundreds of convictions were overturned. Likewise, cameras were installed in the district courts for supervision. However, Justice Shah also wondered about the downsides of live coverage of court proceedings.

Terming the top court verdict in Zulfiqar Ali Bhutto murder case as the ‘most controversial’, Justice isa referred to Justice Naseem Hassan Shah’s interview wherein he had revealed that there was pressure by the government to issue a verdict against the PPP leader.

A member of the bench Justice Munib Akhtar asked the judge to deliver an argument on live coverage of the matter raising the question whether the judge (Justice Qazi) will sit in full court if the current matter is referred to it. To which Justice Isa responded he will decide once after receiving the agenda of the full court.

Justice Isa contended that the Chief Justice of Pakistan is also chairman of the Supreme Judicial Council and used to head full court meetings, saying the position of Chief Justice should not be used for conflict of interest. Justice Qazi Faez Isa further said that if a recording of the matter in hand is available, it will illuminate the students for educational purposes saying, “Why we should bury history.” Upon which a member of the bench Justice Manzoor Ahmad Malik observed Justice Isa should avoid any argument that may become part of a judgment which may be cited before him in any case.

However, Justice Qazi Faez Isa said if a judge could be maligned publicly, why their case could not be heard publicly, adding the main stakeholders of the justice system are litigants. He said live coverage of the current matter will not only be beneficial for education and bringing more discipline but will also improve the quality of the justice system.

When Justice Isa referred to a question as to what ‘establishment’ was, head of the bench Justice Umer Ata Bandial termed it as a political argument, however, the Justice Qazi Faez Isa contended the question was not political but is an avoidance of the truth.

Raising from his seat, the Additional Attorney General for Pakistan Amir Rehman apprised the bench that the government will oppose Justice Isa’s request for live coverage of the case in hand.

Later, hearing of the matter was adjourned till March 08.