* 'We are so in love with our daughter, Lucia,' Hilaria, 37, wrote alongside a photo of the little one 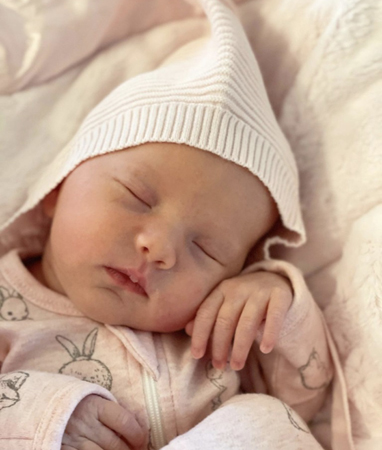 Meet the newest member of the Baldwin family. Just one day after Hilaria Baldwin and Alec Baldwin announced the arrival of their baby girl, the fitness instructor took to Instagram to reveal the newborn’s name.

“We are so in love with our daughter, Lucia,” Hilaria, 37, wrote alongside a photo of the little one. “Just like your brothers and sisters, you are a dream come true.”

Lucia is the sixth child the couple has welcomed into the world. They’re also parents to Carmen, 7; Rafael, 5; Leonardo, 4; Romeo, 2; and Eduardo, almost 6 months. In addition, Alec, 62, shares daughter Ireland Baldwin, 25, with his ex-wife Kim Basinger.

Alec and Hilaria introduced the newest member of their family by sharing a photo of the author cuddling with their kiddos. She captioned the image, “7.”

Over the years, Hilaria has posted about her experiences with motherhood and detailed her journey. In 2019, for instance, she shared she suffered a miscarriage, her second that year. She also frequently posts pictures from the Baldwin household and recently published photos of Carmen painting and working on her math homework.

But there was a point when Hilaria was taking a step back from the spotlight. Last year, social media users raised questions about her heritage, accusing her of faking a Spanish accent and claiming she went by the name Hillary while growing up in Massachusetts.

After taking a nearly six-week break from social media, Hilaria returned to Instagram in February to let her followers know she’s been “listening, reflecting, and asking myself how I can learn and grow.”

“My parents raised my brother and me with two cultures, American and Spanish, and I feel a true sense of belonging to both,” she wrote at the time. “The way I’ve spoken about myself and my deep connection to two cultures could have been better explained-I should have been more clear and I’m sorry. I’m proud of the way I was raised, and we’re raising our children to share the same love and respect for both. Being vulnerable and pushing ourselves to learn and grow is what we’ve built our community on, and I hope to get back to the supportive and kind environment we’ve built together.”