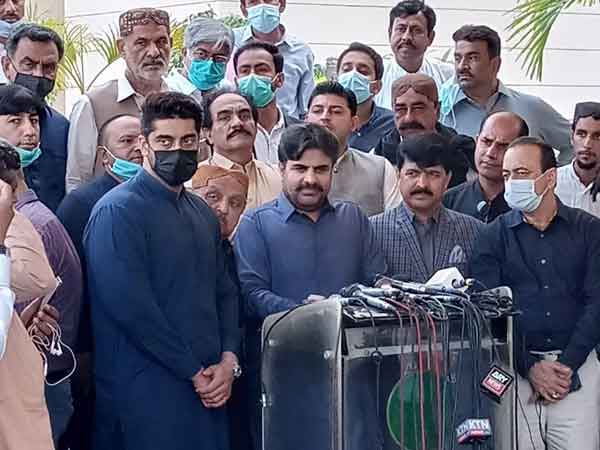 Sindh Information Minister Syed Nasir Hussain Shah while rejecting the allegations of kidnapping and sale of members of PTI said that PPP believes in democracy and everyone has the right to vote according to his conscience and added that there was no pressure on anyone to vote.

The Minister said this while talking to media persons at the Sindh Assembly media corner on Tuesday. He said that Chairman Bilawal Bhutto Zardari has given special directives that the whole process should be accomplished in a democratic manner. He said that an unfortunate incident took place on the floor of Sindh Assembly today which should not have happened. “PTI staged drama in Sindh Assembly. “ Was it planted or any truth in it? PPP has nothing to do with it,” the minister added.

Syed Nasir Hussain Shah said that if Pakistan Peoples Party was involved in bullying and purchase of vote, why should we have brought them on fore? We could have got vote silently.

He said that MPA Karim Bakhsh Gabol has expressed his displeasure on party policies through a video statement yesterday. PTI’s Mohammad Aslam Abro and Shehryar Shar followed him who have also expressed reservations over their party’s nominations and attitudes in a video statement. He said that PTI’s own members were not happy over the nomination in Baluchistan and KPK and senior members of PTI have announced not to vote for their candidates on media.

He added that today these three members came together in same car. They could tell for themselves who threatened them. “ MPA Karim Bakhsh Gabol was forcibly taken away by PTI MPAs and PPP MPAs tried to stop them that but when Gabol Sahib told our MPAs that he wanted to go with them, our MPAs stayed away,’ the minister narrated.

Responding to query on MQM Pakistan’s decision of supporting PTI , he was of view that they accepted the decision of MQM Pakistan. We went to them in front of everyone under the political process. We made an offer to them which our democratic right . But they have decided to ally with federal government after consultation with coordination committee. We accept their decision.

In response to another question, he said: Prime Minister Imran Khan has decided to hold meeting with the MNA’s for two days in week. The Minister asked if he not meet with the members of national assembly earlier. The Prime Minister knows that his own people have serious objections on senate nominations, so he has started a series of meetings with assembly members.

Answering a question on Election Commission, he said, “We trust all our institutions and whatever they decide, we believe would be in interest of country and betterment of system.

He said that the federal government was a government of revenge and accusations, obviously, its effects will trickle down and today PTI’s members in Sindh assembly has alleged media persons .

Responding to another question, the Provincial Minister said that defection rule did not apply on senate vote. If anyone deviates from his party on the Prime Minister and the Finance Bill vote, then defection rule imply.

On another question, he said that he would give vote according to his conscience to the PPP nominees. The PPP has nominated its workers for the Senate. Yousuf Raza Gilani, Farhatullah Babar and Taj Haider are PPP workers and they have a long association with PPP.