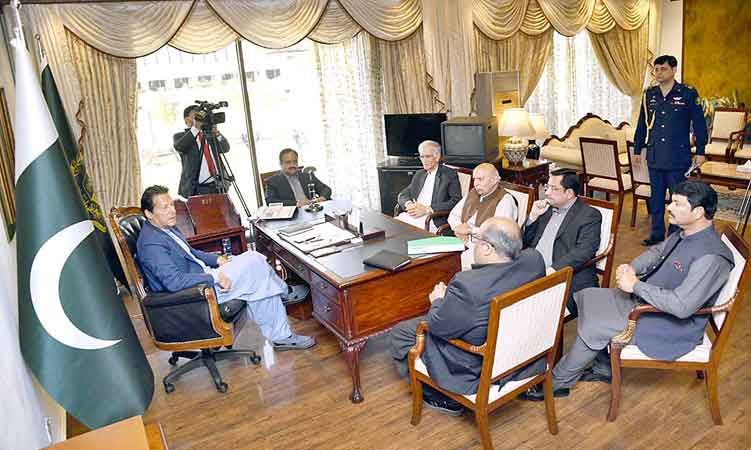 The campaign for upcoming Senate elections in the country came to an end on Monday midnight.

In a statement, the ECP asked all political parties and the contesting candidates to follow the provisions of law and exercise self-restraint so that the election is held in an orderly and peaceful manner on Wednesday. The electoral body also warned of a legal action in case of any violation of the code of conduct.

Meanwhile, PPP leader Yousaf Raza Gillani on Monday urged Prime Minister Imran Khan to vote for him in the upcoming Senate elections. Gillani – who is contesting the Senate seat from the PDM’s platform in the upcoming polls on the Islamabad seat against Advisor to the Prime Minister on Finance Dr Abdul Hafeez Shaikh – has written a letter to all lawmakers to support him in the election. He sent the same letter addressed to members of the National Assembly, seeking support for his candidacy, to the prime minister as well. As per the contents of the letter, the PPP leader has urged lawmakers to vote for him, keeping in mind his character and politics in mind. In the letter, Gillani has stressed on the lawmakers to think about the future of the country as the election of the Senate will profoundly impact it.

The Muttahida Qaumi Movement-Pakistan (MQM-P) on Monday decided against accepting the PPP’s offer for the Senate elections and announced to support PTI and GDA candidates in the polls. According to sources privy to the consultation within the party, the MQM-P would support PTI candidate in Sindh on a technocrat seat while it would be supported on the seat reserved for women in exchange.

Giving reason to reject the PPP offer, the MQM-P sources said that the masses would not forgive them if they supported the ruling party in the Sindh province. “We only want our just right in jobs and correct counting of the people in the urban areas of the province,” they said. Later former Mayor Karachi and MQM-P’s Senior Deputy Convener Waseem Akhtar confirmed the decision and said that they had further conveyed the party’s decision to the PPP. Pakistan Tehreek-e-Insaf (PTI) Karachi President Khurrum Sher Zaman on Monday claimed that PTI’s three members of provincial assembly (MPAs) had been abducted. The MPAs had gone missing on Sunday and their families were worried about their well-being, he added.

Flanked by PTI’s Parliamentary Leader in Sindh Assembly Firdous Shamim Naqvi, Bilal Ghaffar, Jamal Siddiqui, and others at the Insaf House, Khurram Sher Zaman said they had registered their complaint about the missing MPAs with all the relevant organizations.

He said a video of MPA Karim Bux Gabol had surfaced, who was pressurized. Fake cases were being registered against the PTI MPAs, he alleged. Khurrum said Prime Minister Imran Khan had been informed about the whole situation. The Pakistan People’s Party would be responsible if their workers were hurt, he added.

Meanwhile, PTI MPA from PS-100 in Karachi, Karim Bakhsh Gabol recorded a video statement in which he categorically said that the party’s government had ‘failed to deliver for the masses’. “We are hearing things about some [PTI] candidates who got the [Senate] tickets. We are hearing that they received the tickets after paying money for it,” the MPA said, adding that he would never vote for such candidates. “I am a PTI worker and will remain with party, but can’t vote for its candidates in Senate elections because the party has given the ticket to candidates in exchange of money,” he could be heard as saying in the video. He added that he cannot support such candidates who have “purchased” a ticket.

Criticising his own party for failing to deliver as per the people’s expectations, he said that Sindh was being given “step-motherly treatment” by the federal government.

Another MPA of the party from Sindh, Shaharyar Shar, alleged that the party issued tickets for the Senate elections to candidates from Sindh without consulting the MPAs of the party. “I raised the problems of Sindh in front of the prime minister and the governor but they did not listen,” he said. “They [PTI government] do not have any programme for Sindh.” Shar said that he and others would not vote for the candidates selected by the prime minister, adding that the party’s MPAs from Sindh were “upset with them”.

He said PTI MPA Khurram Sher Zaman’s statement about him and other MPAs being kidnapped was false. “Who can kidnap us? I am right here in my house,” he said. Reports said a few other MPAs belonging to PTI and its coalition partners in Sindh and Punjab are ready to give their votes to candidates of Pakistan Democratic Alliance (PDM) – an 11-party alliance aiming to oust the government of Prime Minister Imran Khan. “The actual contest is between PDM’s Yousaf Raza Gillani and PTI’s Dr Abdul Hafeez Shaikh on Islamabad seat. We will give surprise to everyone on March 3,” PPP leader Syed Nasir Hussain Shah said in a statement on Monday, adding that many PTI leaders and lawmakers are unhappy with the performance of the federal government, therefore, they are ready to vote for the candidates of the opposition parties.