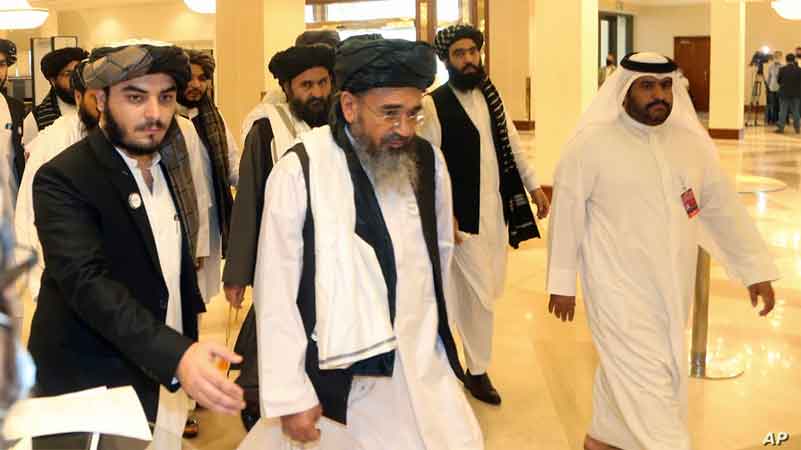 On the first anniversary of the landmark Doha agreement, the Taliban on Sunday called for withdrawal of all foreign forces “within the specified date”.

The Taliban and the United States signed what the Taliban called as a “historic deal” in the presence of international observers along with the foreign ministers and representatives of several countries on Feb. 29 last year.

All foreign troops should withdraw by May 1 under the agreement but statements from senior American officials about a review of the Doha agreement has created doubts about its implementation.

This agreement is a historic accord between the people of Afghanistan and the people of America because it is aimed at ending the twenty-year imposed war.

The Afghan government is upset at the Taliban refusal to declare a ceasefire and cut ties with the foreign militant groups but insist that there is still a chance for peace that should not be lost.

Speaker of Afghanistan’s National Assembly Mir Rehman Rehmani claimed on Sunday that the Taliban do not have any peace plan and had kept the level of violence high.

Speaking during his visit to Tajikistan, Rehamni said the rise in violence has harmed the peace negotiations, according to reports.

Spokesperson to the High Council for National Reconciliation Faraidoon Khwazoon tweeted Afghans hoped that fighting would end with the start of intra-Afghan negotiations but unfortunately this did not happen.

The Taliban and the Afghan government started negotiations on Sept. 12 but have failed to agree on an agenda. The Taliban have rejected calls for ceasefire but said a decision will be taken during the negotiations among Afghans.

A Taliban statement said they are committed to all contents of the agreement and view its implementation the sole effective tool for resolving the Afghan issue and establishing peace that shall be realized under the shade of an Islamic system. “The Islamic Emirate also calls on the other party to the agreement (United States of America) to honor its own commitments towards security and stability in Afghanistan by implementing all parts of the agreement,” the statement said.

The Taliban said the release of remaining prisoners and end of the UN blacklists are part of the agreement that have yet to be implemented.

“Practical steps must be undertaken to expedite the ongoing intra-Afghan dialogue process. The implementation of the agreement must be utilized to improve the situation and pushing it in the wrong direction must be avoided,” according to the statement.

A Taliban official told Daily Times on Sunday that the US officials did not give any assurance when the Taliban negotiators raised the issue of the release of remaining prisoners in a meeting on Jan. 16 that was last meeting between the Taliban and the US special envoy Zalmay Khalilzad during the Trump’s administration.

Khalilzad, who has been retained by the Biden administration on his position, has embarked on a new visit to the region and Germany was his first stopover, according to the media. The US envoy is also expected to visit Pakistan and Qatar.

The Afghan government and the US accuse the Taliban of increasing violence against the Afghan forces after the signing of the Doha agreement. The UN Assistance Mission in Afghanistan (UNAMA) and the UN Human Rights Office said in a report released on Feb. 23 that there was a rise in civilians killed and injured in Afghanistan following the start of peace negotiations in September.
But the Taliban on their part said they have “significantly reduced” the level of operations in line with the Doha agreement. “No operations have targeted major military and intelligence centers, martyrdom operations have seized, provinces have not been overrun, provincial capitals have not been attacked, district centers have not been targeted, and this is known and clear to everyone,” according to the statement. The Taliban said the US has “not fulfilled its obligations” in this regard as bombardments, drone strikes, raids and offensive operations that were all prohibited on the basis of the agreement are still continuing, which is mostly causing civilian harm and increasing the levels of violence.