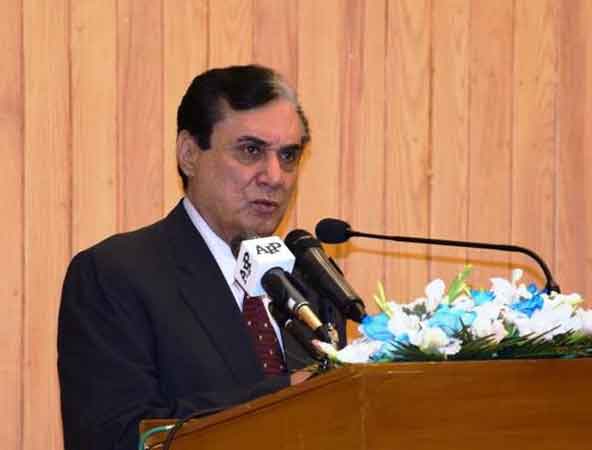 National Accountability Bureau (NAB) Chairman Justice (r) Javed Iqbal has said that the business community is the backbone of the country which is playing an important role in the development and prosperity of country.

“Prosperous business community guarantees prosperous Pakistan. NAB has referred business community matters related to sales tax, income tax and under invoicing to Federal Board of Revenue (FBR) in accordance with the law,” he said, adding that NAB believes in zero corruption, 100 percent development and is absolutely committed to eradicate corruption.

Father of the Nation Quaid-e-Azam Muhammad Ali Jinnah had termed bribery and nepotism as a curse which is also a poison. We need to deal this menace with iron hands. NAB was established for the eradication of corruption and recovery of looted money. NAB is the focal institute of Pakistan under the UN Convention against Corruption. Pakistan has already ratified this convention.The faith of NAB is corruption-free country.

NAB’s anti-corruption efforts have been lauded by nationally and internationally recognized organizations such as Transparency International Pakistan, World Economic Forum, PILDAT and Mashal Pakistan. According to the Gilani & Gallup poll, 59% of people trust the NAB. “Our country has billions of dollars in debt and no one knows where the money was spent. The NAB is pursuing the cases of those who had nothing in 1980 -but now they own huge buildings,” he said.

From where did they get this money – no one could have touched them in the past, now being questioned about their illegal money, misuse of power, assets beyond income, money laundering and looting the Govt money. He said that NAB is taking action to eradicate corruption from the society without caring about the influence of big fish and the powerful as per law.

He said that NAB had recovered Rs. 487 billion during the last three under the leadership of present management directly and indirectly. He said that NAB has no affiliation with any political party, group and individual but only affiliation is with the state of Pakistan. NAB is a business friendly institution and strongly believes in ensuring self-esteem of all people visiting NAB offices.