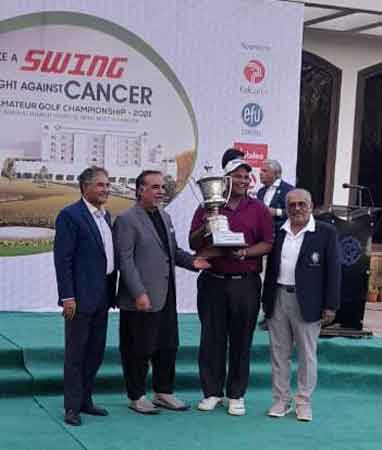 KARACHI: After three rounds of engaging competition of golfing skills, Saim Shazli won the 20th Sindh Amateur Golf Championship at the Karachi Golf Club Golf Course here on Sunday. Saim triumphed by virtually trampling the leader of the first two rounds –– Hamza Shikoh –– through resolute and unwavering performance in the final round. Undoubtedly, in the course of the final 18 holes, Saim showed command and control over his shot making and nerve free application of putting skills on the greens. Saim emerged as the title winner and champion with three rounds scores of 75, 73 and 74 and a gross aggregate score of 222, six over par. Certainly, Saim succeeded in casting his spell on this prestigious event where the Sindh Golf Association teamed up with Shaukat Khanum Memorial Cancer Hospital to show case their under construction largest cancer hospital in Karachi.

As for the other performers in the gross section, young Yashal Shah won the runner-up position with a three rounds aggregate score of 224 and ending up at the same score of gross 224 was Arsalan Khan. Hamza, the first two rounds leader, came fourth followed by Omar Khan, fifth, Saad Habib, sixth, and Omar Khalid, seventh. In the net category, Saad Habib won the first net with a score of net 212. The second net was won by Zunair Khan. His score was net 217.