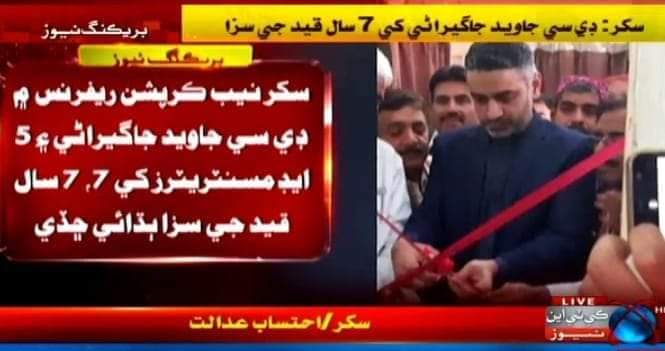 The anti-graft body has often been censured for its modus operandi but this time around, bureaucracy has excoriated its workings as being patently unlawful, unjust and in furtherance of a political agenda.

Sources stating startling facts makes it is a fit case for the country’s superior judiciary to see how innocent people are made accused and accused made innocent here in the garb of accountability. Recent judgement passed by NAB Court is one of the glaring examples of that.

In Sukkar’s Accountability Court (AC) judgement, Javed Jagirani has been indicted for a paltry sum of Rs 4 lacs 60 thousand (5 lacs with interest). As a matter of fact, the original application was fined in 2010, five years before he assumed the additional charge of Administrator.

The procurement rules of 2001 which were allegedly violated were repealed in 2010. Therefore, their validity is in question and consequently, the judgement handed over to Jagirani appears to be equally questionable.

While it is true that the being the administrator, he had signed the bills worth amount mentioned above, the bills were duly audited. Nowhere in the judgement the charge has been proved against him, nor has the inauthenticity of the bills been proved. Since a deputy commissioner does not check each and everything, given the scope of work he has been assigned, the officers generally take the audited bills for granted. Moreover, the statements given by the audited themselves absolve him of the charge, but to no avail.

Notably, the NAB had investigated corruption during development works by the Municipal Corporation, Larkana, from 2012 to 2014.These are some of the discrepancies in the case.

This is the classic example that shows the vulnerability of the officers working for Government; Just one case against a civil servant may turn the tables.

Such circumstances make creativity, drive and initiative a farfetched dream since even the routine works can put officials in deep trouble.