* Standing for Ultimate Fighting Championship, UFC is the brainchild of a Pakistani American, Rao Shehzad who himself has remained a champion of boxing and kick boxing 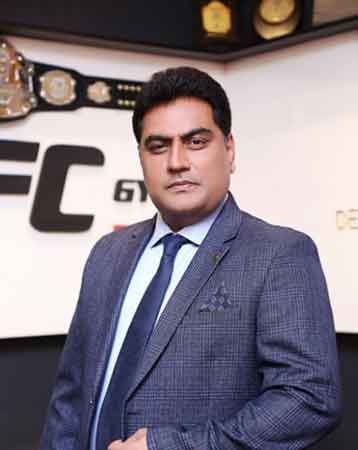 There is no dearth of talent in Pakistan. Be it wrestling, body-building, martial arts, judo karate or weight lifting, Pakistani youngsters have proven themselves in every field, and at a global level. It’s incredible how Pakistan’s athletes have remained successful in sports despite the turbulent socio-political circumstances of the country coupled with a lack of latest facilities and economic stability. It was imperative for these sportsmen to continue being successful and assemble under a single platform to show their respective talents. This dream has finally materialized in the form of UFC Gym, Pakistan.

Located in DHA Rahbar, Lahore, UFC Gym chain happens to be the biggest gym chain established just recently in Pakistan. Standing for Ultimate Fighting Championship, UFC is the brainchild of a Pakistani American, Rao Shehzad who himself has remained a champion of boxing, kick boxing and martial arts at a national level for five consecutive years and is now serving the country as UFC’s CEO. We got in touch with Rao Shehzad to have a little know-how about his biggest gym chain carrying the latest facilities pertaining to the field of sports.

‘I attained my education from a private school. Having done my intermediate from MAO College, Lahore, I attended the University of Minnesota, America for higher studies. I always wanted to be an athlete and was physically fit to be one from my childhood,’ Rao Shehzad says

Tell us something about yourself.

I attained my education from a private school. Having done my intermediate from M.A.O College, Lahore, I attended the University of Minnesota, America for higher studies. I always wanted to be an athlete and was physically fit to be one from my childhood. While studying in America, I continued working hard in the field of mixed martial arts besides striving for social welfare. I attained its result in the form of my country adorning me with the medal of a national champion five times. I made my country proud by winning a silver medal in kick-boxing at an international level event held in America in 1986. After coming back from there in the same year, I won a gold medal at the first international tournament that took place in Wuhan, China. Uptil 1996, I continued to attain first position in the ranking tournament held under Wushu Federation, Pakistan. I have won various national and international tournaments of Free Style MMA Fights, thus keeping my country’s green flag raised. In 1998, I also won a bronze medal in martial arts in Seoul Olympics tournament.

You have plenty of successful pursuits to your credit. Tell us something more about them.

My hard work has won me all these accolades, so much so that I have been appointed as the senior vice president of Pakistan’s Wushu Federation. I was once a part of this organisation as a mere participant. But my long-term association with the field of martial arts and countless prizes at both national and international levels have earned me this position. Seeing my one to one combat training that I gave at multiple institutions both inside and outside Pakistan, I was also nominated for the post of advisory member of Olympic committee, Pakistan. 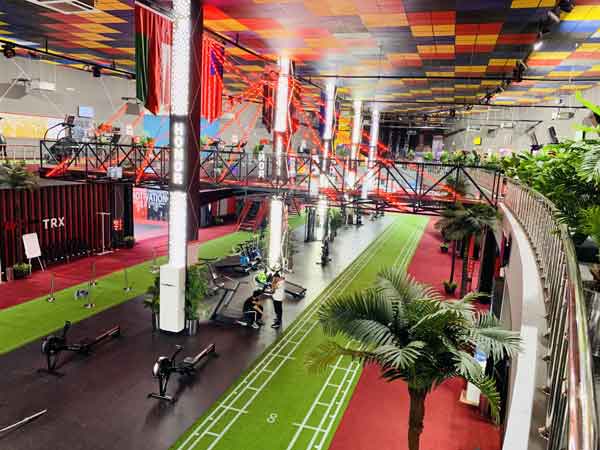 What made you think of establishing UFC in Pakistan, a country with limited sports facilities?

Whenever the green flag of my country would be raised at my name in events I used to win outside Pakistan, I would feel the need to go to my country and serve it by staying there. I felt as if it was high time that I serve Pakistan in lieu of the fame that it has been giving me for so many years. That was when I decided to come back to Pakistan and establish UFC gym chain, for which I burnt midnight oil.

‘My hard work has won me all these accolades, so much so that I have been appointed as the senior vice president of Pakistan’s Wushu Federation. I was once a part of this organisation as a mere participant,’ he says

What was the reason behind bringing western coaches to Pakistan?

During the days when I was working on materializing my dream of establishing UFC, Prime Minister Imran Khan took over the political scenario. His statement regarding work opportunities for westerners in Pakistan would keep echoing in my ears, and by the time UFC’s inaugural event took place in September last year, coaches of almost twenty countries had become a part of this gym chain and were giving proper training to Pakistani public in the fields of judo karate, mixed martial arts, kick-boxing and flexing. Thus, we turned UFC into a practical example of Imran Khan’s vision where people from outside Pakistan were working and earning money. 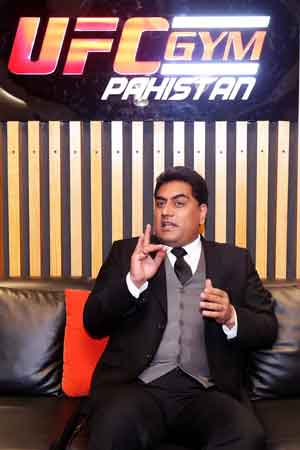 Trainers from which countries are providing coaching services in Pakistan?

Trainers from America, Canada, Brazil, Ukraine, Mexico, Venezuela, Iran, Uzbekistan, Philippines, Cuba, Austria, UAE and China are training Pakistani athletics according to the international standards of the earlier mentioned sports. It is hoped that these trainees will make Pakistan proud in events held at international levels.

Why did you feel the need to establish UFC while Pakistani athletes were already winning global level events in the fields mentioned?

Pakistanis, no doubt, have tremendous talent on the basis of which they have been winning at grand events, but we need to progress more and not stay in the same place. For that, it is important for us to know what is happening in the world, and prepare ourselves in accordance with it, which is possible with the latest of facilities at hand. Even in the past, we have been successful in various sports because of the efforts of various training schools in bringing latest facilities to the country. 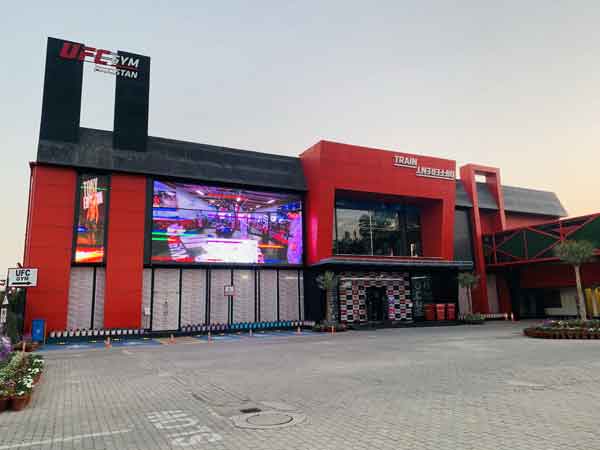 Corona equally affected Pakistan like all other countries of the world. What has been UFC’s role throughout the pandemic?

Our purpose throughout was to follow SOPs as much seriously as possible, and provide trainings of exercises that are essential for maintaining healthy immune systems in human beings. UFC provided all such health facilities which helped keep the virus at bay, and by God’s grace, all of UFC’s staff members have remained healthy during this crisis. 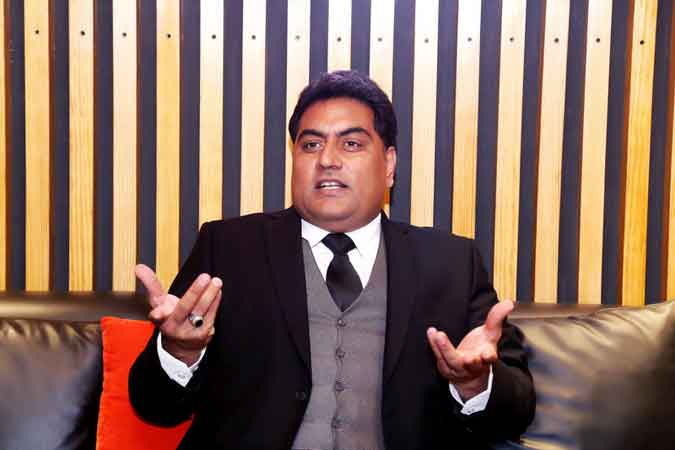 It is being observed that youngsters these days are very much inclined towards drug addiction which results in their poor physical health. What role is UFC playing in keeping youngsters on the right track?

Our focus, apart from providing training in sports that help develop a strong physique, has also been on mental nourishment. Our trainers, during the coaching sessions, give such lectures which help in keeping the youngsters on the right track and avoid taking drugs, steroids or any such thing that may affect their physical and mental health.

Not at all! It’s a family institution as well where children, women and senior citizens are equally attended to. They are given training for both physical and mental well-being. UFC also provides quality entertainment for all age groups, such as playlands, swimming pools, cinema houses, badminton and table tennis courts and snooker halls. As soon as the pandemic comes to a stop, we’ll be opening cafeterias as well.

According to you, does UFC already have all important facilities or are there any other plans that need to be executed?

We’ll soon be holding an international sports expo where all sports facilities that are utilized throughout the world will be exhibited. Besides, such competitions will be held where more than four hundred athletes from all over the world will be allowed to participate. All of this is meant for giving out a positive and healthier image of our country. Celebrities associated with physical training will be invited to Pakistan, for which meetings with Arnold Schwarzenegger, Rock, Michael Bisping, Khabib and their likes are in process. Most of these celebrities are already willing to come to Pakistan. If we succeed in properly executing all of these plans, Pakistan will be counted among the most prosperous of world’s places, and hotel and airline businesses will also prosper along-with the sports. We have planned to open 35 UFC gyms across various cities of Pakistan for which meetings with important business companies and market people for sponsorship are being held.

How important will the government’s role be in making UFC a gym chain following international standards; the kind of which it wishes to be?

Up until now, the entire effort, from developing the idea to constructing its first building has been solely ours. However, for UFC to continue flourishing and helping Pakistan’s young athletes, the government’s help will become ineluctable. Our individual effort needs to be coupled with the government’s desire to promote sports and Pakistani sportsmen around the globe. It is when both public and private collaborations are made that Pakistan will be able to rapidly progress in the field of sports.