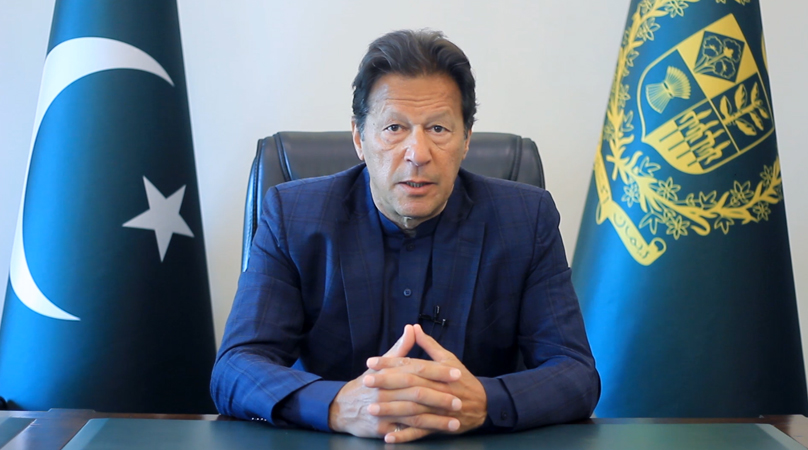 Prime Minister Imran Khan on Saturday said Pakistan has always stood for peace and remained ready to move forward to resolve all outstanding issues with India through dialogue.

The prime minister congratulated the nation and saluted the armed forces on the second anniversary of the country’s response to India’s illegal and reckless military strikes against Pakistan. “As a proud and confident nation, we responded with determined resolve at a time & place of our choosing,” he said in a series of tweets.

Imran Khan said, “We also demonstrated to the world Pakistan’s responsible behaviour in the face of India’s irresponsible military brinkmanship, by returning the captured Indian pilot.”

He welcomed restoration of ceasefire between Pakistan and India along the Line of Control. “The onus of creating an enabling environment for further progress rests with India,” he said, and stressed that India must take necessary steps to meet the long-standing demand and right of the Kashmiri people to self-determination according to the United Nations Security Council resolutions.

On February 27, 2019, a day after the botched Balakot airstrike by the IAF, the Pakistan Air Force had retaliated and in the following air action, two Indian aircraft – a MIG-21 and a SU-30 – were shot down. One of the aircraft crashed in Azad Kashmir and its pilot, Wing Commander Abhinandan, was capture. Islamabad released the pilot after a day of captivity.

The DGMO’s of Pakistan and India agreed to enforce the ceasefire – which came into effect on February 25 – on the disputed border between the two nuclear-armed neighbours. The announcement for the ceasefire on the LoC was made simultaneously by both Islamabad and New Delhi after a telephonic conversation between senior military officials of the two countries.

The director-generals of military operations of India and Pakistan reviewed the situation along the Line of Control and all other sectors in a “free, frank and cordial atmosphere,” the Inter-Services Public Relations (ISPR) had said in a statement a couple of days ago. The two DGs of military operations had made hotline contact in the interest of achieving “mutually beneficial and sustainable peace”, a statement by the ISPR had said. It said they had agreed to address each other’s core issues and concerns which have the propensity to disturb peace and lead to violence. Both sides had agreed for strict observance of all agreements, understandings and cease firing along the LOC and all other sectors, which had taken effect from midnight 24/25 February 21. It was reiterated by Pakistan and India that existing mechanisms of hotline contact and border flag meetings will be utilised to resolve any unforeseen situation or misunderstanding.

Observers believe that the Indian government’s willingness to agree to a ceasefire may be linked to its tense standoff with China for months. Although India and China recently disengaged from Pangong Lake in Ladakh region, tensions still persist between the two countries. It is believed that India by seeking reduction in the tension along the LoC wants to concentrate on the Line of Actual Control (LAC) with China.

Minister for Foreign Affairs Shah Mehmood Qureshi also Saturday said Pakistan wanted to resolve its issues with India through peaceful dialogue and desired resolution of the Kashmir dispute according to the United Nations Security Council resolutions. In a televised statement, he said, “We have to find solution to our core issues. We have to find a way through peaceful dialogue.” Pakistan wanted dialogue with India but it could not ignore the human right violations of Kashmiris and wanted talks on the Kashmir issue in line with the UN Security Council resolutions, he added.

The minister said Pakistan had no aggressive designs but if Balakot will be repeated Pakistan knows how to defend itself. He said the drama of Pulwama was staged and the conversations and Whatsapp messages of Goswami and Dasgupta showed that it was planned and it had political objectives.