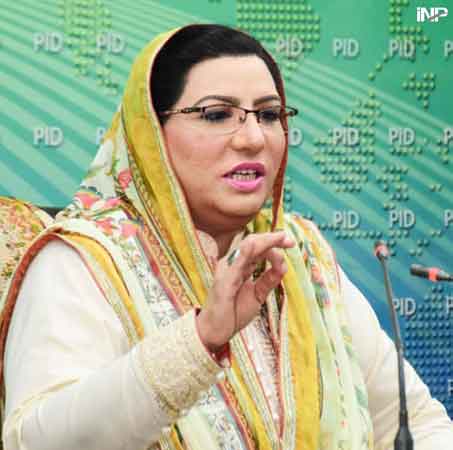 Special Assistant to Chief Minister on Information Dr Firdous Ashiq Awan has said that Pakistan Tehreek-e-Insaf (PTI) is contemplating challenging the Election Commission of Pakistan’s (ECP) decision about re-polling in NA-75 (Sialkot-IV) in the high court instead of the Supreme Court.

Addressing a press conference on Friday, Dr Awan said that the final decision in this regard will be taken by Prime Minister Imran Khan.

The special assistant said that PTI believes that transparent election is the need of the hour. At the time of electoral reforms, the opposition tried to include a bargaining section with the NAB but Imran Khan refused to bail out the corrupt.

She claimed that PTI will gain the majority in the Senate and legislation will be made to restore the respect of vote but if the opposition doesn’t cooperate the electoral reforms, the dream will not materialise.

She said that Prime Minister Imran Khan is committed to transforming Lahore into a modern and developed city. She said that the Central Business District project will boost economic activities in the city, add Rs1300 billion to the national economy and help get Rs250 billion tax. She said that the Ravi Urban Development Project has been started to accommodate the rising population in Lahore.

The special assistant said the Punjab government is qualified and committed to implementing the election schedule submitted to the Supreme Court about the local body elections but open balloting and other reforms are under consultation to save it from horse-trading. Meanwhile, the horse-trading has been transferred to Islamabad where Bilawal Bhutto Zardari and Maryam Nawaz have joined hands to save their corruption.

Dr Firdous said the opposition’s whole politics revolves around corruption and both the parties played a musical chair to continue their stay in power. She disclosed that PM Imran Khan is reforming the economic system, adding that the new LNG agreement with Qatar will save $300 million annually.

The SACM said the PTI government has started providing shelter to the shelterless and low-cost housing project is going to be launched at Tehsil level in Punjab and banks will provide loans to low-grade employees. The applicants will become the owner of their house in Rs1.1 million while paying Rs7,500 monthly instalment, she further said.

The government has linked Arazi Record Centres with 8,000 NADRA centres and a proposal is under consideration to outsource it for saving the people from corruption, she said. Dr Firdous alleged that both PPP and PML-N have joined hands over the Senate election in Punjab adding that PML-N leaders are used to speaking lies. Those who don’t have votes are trying to get elect favourites with the power of money, she said.