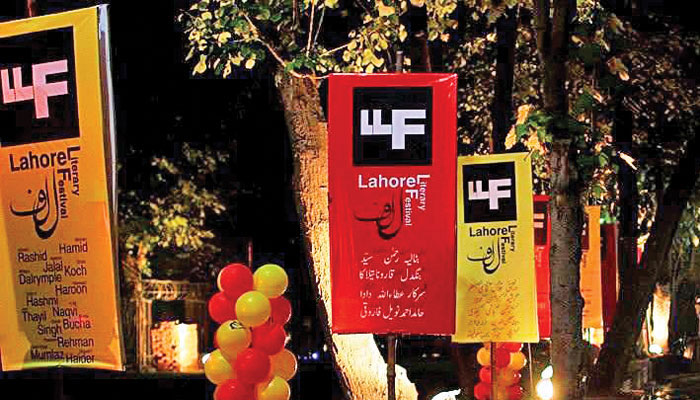 During the uncertain situation in the form of corona pandemic, Lahore Literary Festival did not conduct on-the –ground events this year ,2021.The virtual sessions were arranged on you tube and facebook . It was an intriguing celebration of literature and arts featuring readings by local, national, and international authors, book launches, presentations and dialogues on global issues and politics. The event was divided into four days.

The first session of the event “KAI CHAND THA SARE AASMAN” was a tribute to the works of Shamsur Rehman Farooqi a meticulous Urdu “adab” writer of the times, who started writing in early 6o’s. The panelists were Delhi –based Urdu critic and play writer Shamim Hanfi, Delhi –based educationist, writer, and peace activist,Syeda Hameed and Nasir Abbas Nayyer. It was moderated by Harris Khalique.

Followed was a book launch, “THE VERDICT” of young author Osman Haneef . With gripping and intense plot; the novel (written in simple language) portrays tension of class, injustice unrequited love, magic realism set in the city of Quetta, Pakistan.

Later “SKY FALL” presented a stimulating conversation between   Wajiha Haider and author   SABA KARIM KHAN.  They discussed the work of fiction that   meticulously captured essence of Lahore and Newyork city amidst an air of resistance, protest, pathos &, drama which is cathartic chaotic and messy ,yet beautiful.

Followed was NO WIN WAR; The  paradox of US Pakistan Relations in Afghanistan’s shadow. Kathy Gannon  AP correspondent was in conversation with journalist and DAWN columnist ZAHID HUSSAIN.They both put light on details of conversation and relationships ,security concerns and a huge wall of distrust that the incident of 9 /11 created .

“DESI DELICACIES”   was a book launch on delectable anthology of food writing exploring the rich histories and cultures of Muslim South Asia and its Diasporas; flavors blended with love, nostalgia and joy. Claire Chambers ,Rana Safvi along with Sultana AL’Quaiti and Sanam Maher were the panelists. It was moderated by Raza Rumi.The detailed discussion on the term “burger” ,the evolution of ” qorma” and the metaphor “bhono” was interesting .Claire later emphasized the revival of interest in food during pandemic as it served its therapeutic qualities during unprecedented times.

The next session shifted the focus of the program to “A LOST WORLD; pre-partition memories of Sargodha”.A memoir that Marina Wheeler dedicated to her mother. She related how power was transferred between 1930’s and 40’s, the life and incidents of the then city of Sargodha, territorial rivalries, colonial times and ideals of self determination.

Later in “Interpreting Maladies” Jumpa Lahiri in conversation with BBC journalist Razia Iqbal relates her experiences of accumulating pieces of her life’s experiences in writing. She explores deeply the ongoing dilemmas, conflict, and deeper recognition of oneself, issue of identity and how to relate to the world through the prism of a writer. The frustrated attempts in “INTERPRETING MALADIES” at communicating with one another and disconnection that lead to hurt, missing realities of the world, internal emotional strife and the tranquil surface of the novel, were discussed.

Salima Hashmi in conversation with Kavita Singh in “Decoding The Artistic Process”, explored (through slide show) in detail the making of miniature paintings in mughal courts and later its contemporary artistic style adopted by young artists.

The day one ended with key note session by Wendy Donigar on her upcoming book “The neighs have it : Mythology of Horses In Pakistan”. She spoke in detail about the myths, trading, history, breeds, usage, training, religious and ritual associations of horses of the region that today is Pakistan. She took help from miniature paintings to depict history related to horses, their riders (mostly kings).M.F .Hussain’s horses were also discussed.

In “Not Every one’s Heaven :The Art of Adeela Suleman”  (book launch) Rosa Mario Falvo and Adeela Suleman discussed the first monograph surveying over twenty years of Adeela’s  creative practice. They shed light on different aspects of her personality, use of historical references, memory/ perception, transformative moments and the impact of relationships in her artistic journey.

Followed was the book launch “TREASURED MEMORIES”. The author and former governor of Punjab Shahid Hamid entertainingly parried unexpected questions regarding the memoir and narrative of his life and triumphed in an unconventional interview by journalist F.S .Ejazzudin.

In a  book launch “GHALIB , a Wilderness At My Door Step-a Critical Biography” ,Mehr Afshaan Farooqi was in conversation with Yasmeen Hameed about different aspects of Ghalib’s work; his inclination and deliberate switch  towards Persian language, utter dedication for Urdu,  his predilection for writing difficult, obscure poetry peppered with complex metaphors to create uniqueness in words. Ghalib was a careful, even strict, editor of his work who took to publishing long before his peers.

Later in “Diversity in Literature” author of “THE SCHOLAR” , COURTTIA NEWLAND discussed different aspects of literature with Verda Dar.

“Aag Ka Daryaa” &The Francophile” were the next intriguing sessions.

Headlining the first session of the day was “ALEPH REVIEW” .The editors discussed different yonder of writing for art and English literature and how they go about with editing, selection and publication of ALEPH.

In MIDNIGHT DOORWAYS: FABLES FROM PAKISTAN the author Usman Malik took the audience to an amazing ride of fantastical, magical and surreal story. He himself seemed to connect the threads to put stories/fables together and set them in a deep environment. The illustrations in the book were justified for their deep connection with fables.

“CHEENI KOTHI” (fiction) and BACHA KHAN,My Life & Struggle and Black Wave :Saudi Arabia ,Iran and the rivalry that Unraveled the Middle East were the next book launches.

A book lauch of Diana Dark’s “STEALING FROM THE SARACENS”; a persuasive, intriguing and eye-opening study unearthed facts quite unknown to the world. In a beautifully illustrated book she shed light on the “architectural borrowing”/stealing and its remarkable usage in Europe’s buildings, cathedrals, palaces and House’s of parliament. The author also talked about Syria, its cultural heritage, and its architectural influence on Nortre Dame Cathedral.

The busy day ended with “SLICES OF PIE” .Award winning author  Yann Martel was in intriguing conversation on  his fantasy adventure fiction novel “Life of Pie;a combination of dense religious allegory, zoological lore ,relativity of truth and enthralling adventure tale. He expressed his emotional experiences, dreams imaginations, elements that provoke his sense of identity, reading preferences, travelogues and importance of research and notes for his final piece of art.

The day started with “The Surviver”, a touching discussion with Zafar Masud the survivor of unfortunate plane crash of the year 2020 in Pakistan. Zafar plans to write a book on the horrendous incident and to open a foundation for safety and provision of medicines to the passengers.

In HINGLAG: HOMAGE TO RECOVERED HERITAGE, a narrative of identity of ancient Hinglaj Temple in Pakistan. Schaflechner candidly spoke about Hindu HINGLANG shrine (situated two hundred kilometers west of Karachi, Pakistan) of pilgrimage, the spiritual connection and practices, the importance of   the construction of the Makran Coastal Highway, and ancient mode of transport to reach the site.

In another captivating   book launch “TEN LESSONS FOR A POST-PANDEMIC WORLD” Razi Ahmad,Maleeha Lodhi and author and CNN host Fareed Zakariya  discussed vulnerabilities and the greater –ever risks that Corona pandemic has exposed .They  discussed the bitter and prolonged confrontation of U.S and China.

Zakaria opined that in future countries will likely to see more sluggish economic growth; inequality will get worse; as the big get bigger in every sphere.  Presently the machine learning is moving so fast that for the first time in history human beings might lose control over their own creations. The need of social-global solution and grand plan to the disaster and to vaccinate the world was discussed.

“TIES THAT BIND” British writer Nikesh Shukla author of “ BROWN BABY” was in conversation with Huma Qureshi ,winner of  2020 Harper Bazaar’s short story prize for “The Jam Maker” and author of “How We Met” and moderator Amna Rizwan Ali. The young writers spoke about the memoir that they wrote and discussed in detail their personal exotic experiences.

In “HIGH DRAMA” Amitav Ghosh was in conversation with Muneeza Shamsie.He spoke in detail about rhyme and metrical forms of writing, inspirations for his stories, historical references, stories of displacements/migrations, climate change and narrative strategies to probe the nature of national and personal identity and the culture of Bengal.

“WRITING WRONGS” was a discussion amongst Sindhi playwright Noor ul Huda Shah and Bee Gul, a screen writer of “Talkhian” on how women are shaping narrative in Pakistani drama.

“Multiple Belongings” was another captivating literary session. Elif Shafaq ,an award-winning British-Turkish novelist and the most widely read female author in Turkey was in conversation with Maha Khan Phillip .In a lyrical manner she spoke in detail about interdisciplinary learning ,the idea & spiritual exercise behind her books .She tried to advocate the diversities in life, complexities that women face and also her effort to be a voice for the silent sufferers. She opined that arts and freedom cannot flourish without democracy .Being citizens of the world we should try to leave our confined boundaries by reading books. She stressed on the importance of empathy and emotional intelligence. She is working on upcoming new novel.

“The First cell” was very inspiring and charismatic book launch & dialogue session between Pakistani-American oncologist and writer Dr.Azra Raza and Qazi Shaukat Fareed. In a beautiful lyrical manner and dialect she read poetry of Ghalib, a subject very close to her heart. THECELL is an intimate journey from hope to despair and back again, it “explores cancer from every angle: medical, scientific, cultural, and personal indeed”. She stressed on early detection that is the only cure and a pluralistic approach to find the cure for cancer and study of ageing. She opined that there is a dire need of policy change for the treatment .Being a cancer widow herself; she saw cancer through prism of human anguish and bore the burden of being her own husband’s oncologist. The book will be launched in Pakistan in March 2021.

The day ended with “A Brief History of Curating”, a dialogue between HANS ULRICH OBRIST and Zain Masud.

Throughout the days LLF had lively and engaging appeal .The blend of virtual events served the festival’s loyal community around the globe.