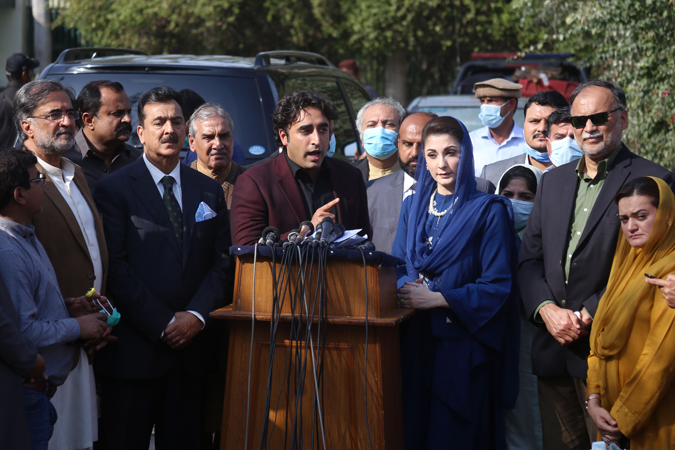 The PPP leader observed this during a press conference held along with Pakistan Muslim League-Nawaz (PML-N) Vice President Maryam Nawaz, following a meeting of the two party leaders at the Jati Umra in Lahore.

The meeting came as both the opposition parties and ruling government finalised candidates for Senate polls, scheduled to be held in about a week’s time now.

During the meeting, the PPP and PML-N leadership discussed the country’s current political situation as well as the opposition’s anti-government campaign.

The PPP delegation comprised Yousuf Raza Gillani, Makhdoom Ahmed Mehmood, Qamar Zaman Kaira, Chaudhry Manzoor and Hasan Murtuza, while the PML-N leadership comprised Ahsan Iqbal, Pervaiz Rasheed, Murriyam Aurangzeb, Rana Sanaullah and Saad Rafique. Addressing the presser, Maryam Nawaz, while responding to a question about the opposition being ‘secretly pressurised’ [by the establishment], replied that the establishment not being a part of the political spectrum in a democracy is not news. “It becomes one when it starts taking part in politics,” the PML-N leader said. “It is best for the country that the establishment remains neutral and stay within its constitutional limits,” she added.

Commenting on the matter of open balloting in Senate polls, Maryam said, “Issues falling within the purview of parliament must be decided in parliament. Dragging the courts in the discourse is going against the legislative procedure.” She further added that Yousaf Raza Gillani was not representing only PPP in Senate elections, rather the whole of PDM. Reiterating the party’s stance, the PPP chairman observed that, “Our short-term goal is to remove this puppet government from power and our long-term goal is to establish democracy and rule of law in Pakistan.” Also commenting on the Senate polls, Bilawal believed that the competition between the incumbent Minister of Finance Hafeez Shaikh and Gillani would be a deciding factor for lawmakers.

“Members [lower houses] need to make a decision whether they want to continue voting for the PTI/IMF candidate or the people’s candidate,” he asserted. In addition, Bilawal observed that the PPP has always played the role of a democratic opposition. Talking about the PDM’s long march scheduled for next month, he said, “Protest is a democratic right bestowed to us by the constitution and implementing it is also democratic.”

“Every elected government should complete its five-year term. But when a government is selected and chosen by non-democratic elements, then it should be removed as soon as possible,” the PPP chairman maintained.