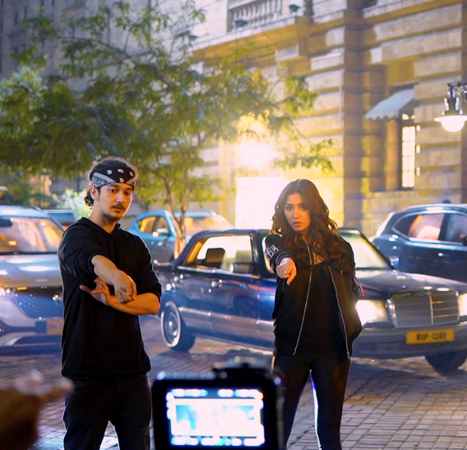 Contemporary in its finish, visually stunning, crisp editing and tells a story of endurance, strength, and the will to succeed.

Kingdom is the manifestation of Hasan Dawar’s vision of perseverance and carrying on until you achieve your goals. Kingdom is about facing your fears, your inner battles and prevailing. Kingdom is a journey of triumph and victory against all odds.

The gritty, edgy video is in perfect harmony with the strong vocals belted out by Abdullah Siddiqui and Altamash Sever. Kingdom pushes boundaries and Dawar meticulously builds a story setting the tone for what is yet to come. Hasan Dawar’s repertoire of work has always deviated from the expected. Kingdom is no exception.

The gritty, edgy video is in perfect harmony with the strong vocals belted out by Abdullah Siddiqui and Altamash Sever. ‘Kingdom’ pushes boundaries and Dawar meticulously builds a story setting the tone for what is yet to come

The special effects in the video manifest the emotions Dawar wants to express through his lens. The antelopes running, the earth shattering and breaking free from the dark dreary landscape at its core reflect the endurance of the Peshawar Zalmi’s cricket team. The music builds to a crescendo and Dawar takes it further making the audience feel they are part of the story.

The dark thematic composition throughout the video is an ode to the battles we fight within. It is an anthem for everyone going through personal trauma and grief. The visuals give the strength to fight back, to get back up and look fear in the eyes and win.

Hassan Dawar shared his thoughts on directing ‘Kingdom’ and ‘Like every project I take on, Kingdom is close to my heart and I credit the team behind it who gave me the creative freedom to execute the video. ‘Kingdom’ is a metaphorical representation of life which can be a battlefield. It is about passing through the hurdles we face each day and how we leave them behind. It is about the acceptance and the peace we make with ourselves and how we take a leap of faith under perilous conditions.’

Hassan Dawar’s directorial projects are setting standards for production values in Pakistan. His portfolio is proof of Dawar’s devotion to his craft. His ability to combine storytelling with dramatic cinematography and incorporate cutting edge technology sets him apart from his peers. His creative prowess, ingenuity, and artistic direction is building an iconic body of work for decades to come. This is the beginning to a long road of cutting edge and innovative projects set to captive audiences.

Hassan Dawar is known for creating captivating pieces high in production value which has led him to have an impressive resume behind him. At only 29, under the banner of his own production house called “Ten Eighty Films”. He has worked with leading national and international brands such as Pepsi, Samsung, Oppo, Tropicana, Mountain Dew, Nestle, 7up, Lays, Telenor, Red Bull, Total Parco, Huawei etc.