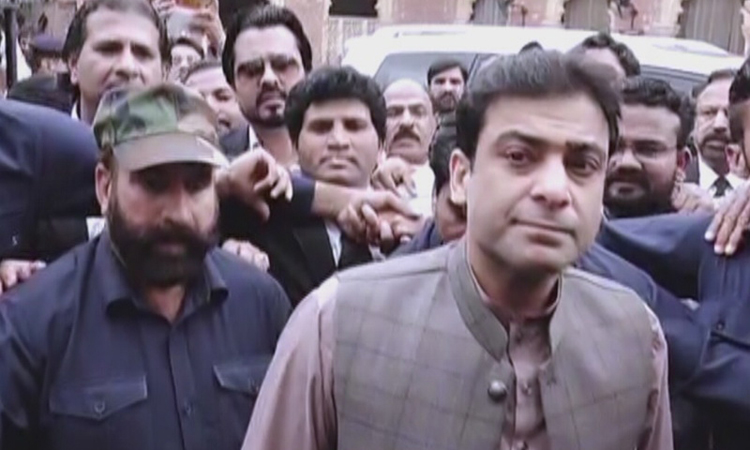 The Lahore High Court (LHC) on Wednesday granted bail to Leader of Opposition in Punjab Assembly and PML-N leader Hamza Shehbaz in a money laundering case.

A two-member bench of the LHC comprising Justice Sardar Muhammad Sarfraz Dogar and Justice Asjad Javed Ghural heard the bail plea of Hamza in the money laundering case. The bench ordered the release of the PML-N leader from the Kot Lakhpat Jail in Lahore.

Earlier this month, Hamza had filed his second petition before the high court for post-arrest bail on merit in the reference related to money laundering and assets beyond means. The bail had also been sought on an additional ground of hardship and inordinate delay in the trial proceedings as the Supreme Court in January denied relief to the petitioner with a direction to approach the LHC with fresh grounds for bail. The petition filed through advocates Azam Nazir Tarar and Amjad Pervaiz stated that Hamza was arrested on June 11, 2019, while the reference was filed on Aug 20, 2020, whereas the charges were framed on Nov 11, 2020, after a period of “unconscionable delay” of 17 months. It said the delay could not be attributed to the petitioner in any manner whatsoever. It argued that the petitioner was entitled to bail on this ground of delay alone without touching the merits of the case.

During the hearing on Wednesday, NAB’s counsel Faisal Bukhari argued against granting bail to Hamza. He said that Hamza’s assets in 2003 amounted only to a few hundred thousands of rupees which mushroomed to Rs 523 million in 2018. “Millions [of rupees] have come in Hamza Shehbaz’s personal accounts illegally. An inquiry into money laundering and assets beyond means was started during the tenure of the PML-N government. Notices were issued to Hamza Shehbaz but he did not provide answers [on where he got] any amount,” he informed the court.

NAB filed the reference in 2020 after the investigation was completed, he said, adding that of the 20 people who were named in the reference, six had become absconders while four turned approvers in the case. The accused were indicted in November 2020 and the trial was ongoing, Bukhari further said. He reminded the court that the LHC had previously rejected Hamza’s bail. “Hamza Shehbaz received more than Rs81m telegraphic transfers (TTs) from abroad. He has not disclosed the source of his money till today.”

Bukhari claimed that Hamza was a beneficiary of money laundering. “Merit is also seen in a case and not just hardship. Hamza’s lawyer has taken three [adjournments] in the trial and it will be delayed as a result. NAB has not asked for even one adjournment till today,” he added.

Meanwhile, PML-N deputy secretary general Ataullah Tarar termed the decision a ‘victory’, saying that the LHC had directed that Hamza be released after submission of two bail bonds of Rs1m each.