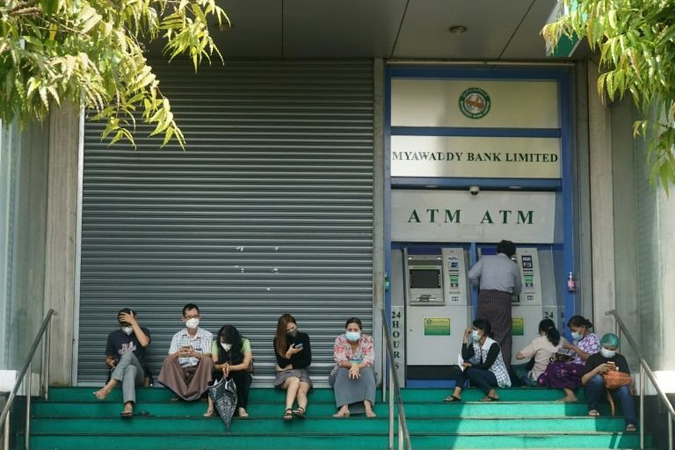 Early bird customers of a military-owned bank queued anxiously as dawn light crept over Yangon, after a strict new limit on daily cash withdrawals fuelled rumours of a money shortage in post-coup Myanmar.

Nationwide protests have called for employees — including bank workers — to skip work, seizing up a banking sector heavily dominated by the military and its cronies ahead of the monthly payday this Friday.

For those in need of cash, it does not help that no clear information has been released.

The uncertainty has fuelled worries of cash shortages, said Tun Naing, a 43-year-old businessman who has queued up daily for the past week to withdraw six million Myanmar kyat — or about $4,500 — from his Myawaddy bank account.

“Because of rumours about this bank, I came to withdraw my money,” he told AFP.

Despite being the sixth-biggest domestic bank in Myanmar, Myawaddy is only allowing 200 customers per branch to make withdrawals limited to 500,000 kyat a day — about $370.

Getting a spot in the morning is key, with “some people staying at nearby hotels to queue early for tokens”, Tun Naing said.

Others are not so lucky.

Retired teacher Myint Myint has been queueing every day for a week but still has not been able to make a withdrawal.

“They should announce through (state-run media) that our money is okay… Although my savings are not much, I’m worrying because of rumours.”

Despite the irregular opening schedules of banks across Yangon, a notice in state-run newspaper New Light of Myanmar claimed that daily services were still being provided.

“People are requested to take part in this process for ensuring economic stability of the country,” read the Central Bank notice.

While the risk of cash shortages in the country is high, the timeframe is unpredictable, said Myanmar-born international business expert Htwe Htwe Thein from Australia’s Curtin University.

“In the past under the previous military government, they had been known to print money and that of course hyped up inflation,” she told AFP.

And the situation is expected to get worse because of a civil disobedience movement that has government employees boycotting work.

The generals have already been hit with sanctions by the United States, Britain, Canada and the European Union, and the larger economy is also at risk of suffering reputational damage and a decline in foreign direct investment.

International credit ratings agency Fitch swiftly revised the country’s growth estimates for most of 2021 down from 5.6 percent to 2 percent on the day of the coup, citing “elevated political risks”.

A potential pause on foreign cash inflow has raised the alarm for activist group Justice for Myanmar, who say the generals could now dip into some $6.7 billion worth of Myanmar’s foreign reserves.

So far, US sanctions have included a $1 billion asset freeze.

“If foreign banks continue to do business with these banks under military-control, they will be complicit in propping up the military regime,” Justice for Myanmar said.

‘I have enough difficulties already’

On the ground, the worries are more immediate — such as how companies will pay their employees at the end of the month or how the elderly will get their pensions as hundreds of thousands take to the streets to protest against the coup.

Aye Aye, 85, said between the unclear opening schedule of her bank and the demonstrators on the street, she is reluctant to withdraw her pension until the situation gets calmer.