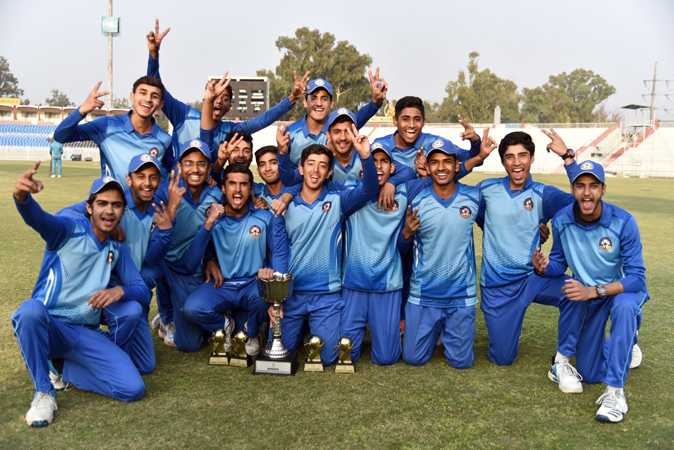 RAWALPINDI: Central Punjab retained the PCB Under-16 National One-day Tournament title with a five-wicket win over Northern in the final at the Pindi Cricket Stadium on Tuesday. The victory bagged Central Punjab PKR350,000 along with the glittering trophy. Ubaid Shahid scored his second half-century of the tournament to help Central Punjab chased down 184-run target in 41 overs. Ubaid finished the tournament with 348 runs – the most in the tournament – at a staggering average of 116 and was duly rewarded with the Best Batsman of the Tournament award. The right-handed batsman crunched two centuries in six matches. He stroked a crucial 52-run second wicket partnership with Musa Azeem after Azan Awais, the Central Punjab captain, was dismissed for two with only nine runs on the board.

Musa scored 34 and hit five fours from his 59-ball stay at the crease. Raja Balaj made 33 off 39 and hit four fours and a six. Ibtisam Rehman made a handy unbeaten contribution of 28 runs from 21 balls and smashed four fours, while Abdul Rehman returned undefeated on 21 off 41. Ibtisam’s exploits with the bat followed his three wickets, which played a pivotal role in restricting Northern to 183 all out in 45 overs. The all-rounder was declared Player of the Final and he also bagged Best Bowler of the Tournament award after he finished as the highest wicket-taker with 15 scalps at 14.93.

Awais Ali was the other bowler to take three wickets in the innings. Shamyl Hussain top-scored with 35 off 47 and hit five fours. Amir Hassan posted the next best score for Northern with a 46-ball 30. Wicketkeeper-batsman Sheraz Khan (29 off 41) and Hammad Rafiq (23 off 47) were the other notable run-getters. Central Punjab’s Mohammad Shoban took two wickets for 25 as Northern were bowled out on the last ball of their innings. Southern Punjab’s Arafat Ahmed was named Player of the Tournament as the 16-year-old scored 312 runs at an average of 78 and took nine wickets.

His teammate Adnan Shahid shared the best wicketkeeper award with Central Punjab’s Altamash Abbas. Both players had eight dismissals each. Khyber Pakhtunkhwa’s 14-year-old Ahmed Hussain was declared Best Fielder with seven dismissals (all catches). All best performers in the tournament were awarded PKR30,000 each.

Central Punjab U16 beat Northern U16 by five wickets

Player of the match – Ibtisam Rehman (Central Punjab U16)

Player of the tournament – Arafat Ahmed (Southern Punjab U16)

Best Batsman of the tournament – Ubaid Shahid (Central Punjab U16)

Best Fielder of the tournament – Ahmed Hussain (Khyber Pakhtunkhwa U16).