Glad to be playing cricket in pandemic, says Chris Gayle 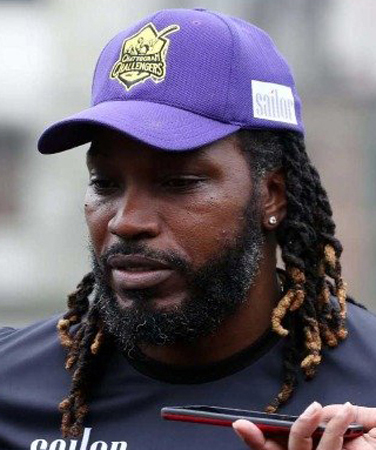 KARACHI: Chris Gayle has reasons to be emotional. He is in Pakistan after a long 15-year gap to feature in the Pakistan Super League (PSL) 6. As such, the “Universe Boss” is featuring in the shortest format for the first time in the country. The most poignant reason for him is he is playing cricket in a pandemic. Although less, but there are some people to cheer him and he plays for people. “I am glad to be playing cricket at this particular time,” Gayle, who is the only player to smash more than a thousand sixes in T20 cricket, said Tuesday. “Playing during this particular time is a blessing. Hopefully, things can get better in the future. When you look at what’s happening in the world there are no fans in the stadiums and people have to watch cricket on television. It is something people and players look back and say we have to appreciate times when we actually had good things and not take them for granted. Things are tough with the world in pause. We must not take life for granted when things can open. We’re going to try to live the best life and live it to the fullest, spend more time with family and friends and reach out to the people a lot more. People were actually at a distance from their families and friends and when all this happened around the world, it brought them closer.”

Gayle hoped cricket will start again at its fullest. “I am sure players are still hungry for it. “It is our livelihood, it is our job, our earning and that is what we know.” The 41-year-old Jamaican smashed a 24-ball 39 in the first match and followed it up with a rapidfire 40-ball 68 for Quetta Gladiators against Lahore Qalandars on Monday. Gayle striking big was no surprise for the fans and followers of the game alike as he boasts a staggering record in T20 cricket. He is the leading run scorer in the format with 13,691 runs at an average of 38.35 and a staggering strike rate of 146.86. Along with being the only batsman to have smashed over a thousand sixers – 1,008 to be precise – Gayle has also smashed 1,050 fours.

In the first two PSL seasons, Gayle donned Lahore Qalandars’ and Karachi Kings’ colours in 2016 and 2017, respectively. On touring Pakistan for the first time since being part of the West Indies team on their 2006 tour, Gayle acknowledges it’s pleasing to tour the country. “It’s good to be in Pakistan after 15 years,” said Gayle, who will leave shortly to feature in the West Indies’ T20I against Sri Lanka back home. “It’s fantastic! I did not get a full house based on restrictions, but it was good to see some people. It was good to have a blast. I am looking forward to continuing playing in Pakistan.” Recalling the bitter-sweet memories of the 2006 tour, Gayle said: “My memory of playing a Test in Multan is good as I scored 94 (93 off 182), but missed out on a hundred. I was leg-before to Danish Kaneria. Then Mohammad Yousuf and Younis Khan kept us in the field for a long time under a boiling sun. I also remember Brian Lara smashing Kaneria for something like 26 runs after a bit of a banter. It was fantastic to see that as a youngster.” On his self-styled claim of being “Universe Boss,” Gayle acknowledged it as a blessing. “It is good when you are someone who has that impact around the world. It is a joy that people turn out for you. So, that makes me happy. It is fantastic.”