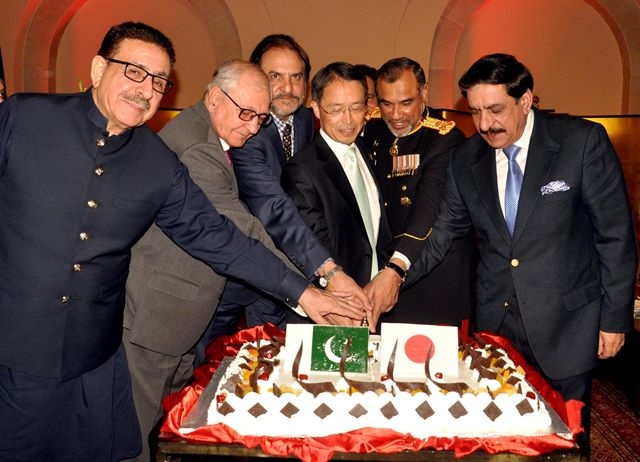 ISLAMABAD: The Japanese embassy marked the 61st birthday of His Majesty Emperor Naruhito here. It, however, didn’t hold the routine grand reception due to the COVID-19 pandemic.

Ambassador of Japan Matsuda Kuninori expressed gratitude and appreciation to the Pakistani government and people for extending their messages of felicitation and good wishes for the emperor and his family.

He said since his accession to the throne on May 1, 2019, as the 126th Emperor of Japan, His Majesty Emperor Naruhito, stood as the symbol of Japan and of the unity of the people.
“His Majesty and the imperial family facilitate the fostering of good relations with foreign countries including Pakistan.”
The ambassador, while recalling the cherished memories of Pakistan’s relationship with the Japanese Imperial House, said Emperor Emeritus Akihito and Her Majesty Empress Emerita Michiko, who were the parents of His Majesty Emperor Naruhito, visited Pakistan as the then-Crown Prince and Princess in 1962, on the 10th anniversary of diplomatic relations, which became the first visit by the members of the Imperial House to Pakistan.

He said Pakistani President Dr Arif Alvi and First Lady Samina Alvi, on the invitation of the government of Japan, paid an official visit to Japan to attend the enthronement ceremony of His Majesty Emperor Naruhito in October 2019.

Highlighting the decade’s old historical and amicable relations between Japan and Pakistan, the ambassador said Japan had remained one of the major bilateral development partners of Pakistan since 1954 extending assistance in multi-faceted sectors.

“The total amount of Japan’s economic assistance to Pakistan by March 2020 amounts to $13 billion and this makes Japan the second-largest economic partner of Pakistan,” he said.
The envoy said as the year 2022 will mark the 70th anniversary of the establishment of diplomatic relations between Japan and Pakistan, the ambassador has invited all Pakistani people to come forward and join hands with the embassy to celebrate this historic relationship in a splendid way. Cultural and people-to-people exchanges are the foundation of our friendship from a long-term perspective, he said.

“We must renew ourselves to further develop our close relations and make a firm resolve to deepen our cherished ties, which will amplify the welfare of people of both the countries,” he said.