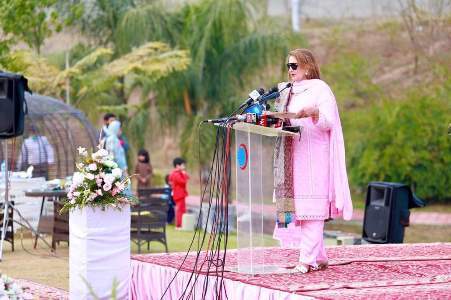 ISLAMABAD, Feb 21: First Lady Samin Alvi on Sunday called for a self-examination awareness and early diagnosis seeing the shocking statistics of 90,000 breast cancer cases annually in Pakistan. She emphasized on ending taboos regarding the deadly disease.

Addressing First Ladies Golf Match held jointly by Shifa International Hospital and Shifa Foundation at Margalla Green Golf Course here as part of the breast cancer awareness, the first lady urged the women to act as an ambassador for the cause to guide the women.

She told the audience that with the early diagnosis of the disease the mortality ratio could be brought down considerably and what all it needed was awareness on self-examination and early diagnosis.

She lauded around 70 lady golfers coming different cities for the noble cause and said they should reach out to the village women as well as guide their housemaids on the disease.

The first lady repeatedly emphasized the self-examination by women and even men every month and timely diagnosis and treatment without adhering to the taboos, considering it just a disease.

She said having known the alarming increase in breast cancer cases, she thought of prolonged awareness drive, other than October when Pink Ribbon campaign is organized for the awareness on the disease.

Citing high prevalence of breast cancer in Pakistan, she said not only the aged women, even the young girls of 20 were also being diagnosed breast cancer which necessitated the frequent reminder for the women for self-examination.

Samin Alvi said the women who were diagnosed early and underwent treatment had been living a normal life even for more than 25 years.

She thanked print and electronic media and the institutions of the armed forces for dedicating their time and services respectively for awareness on the disease as, she said, the whole society, not a single individual, could rid the country of the disease.

She also appreciated some NGOs and hospitals for introducing a shuttle service for the rural women desiring to get their check up in the cities.

She said the frequent messaging and awareness had helped address the taboos to some extent as, unlike the past, the disease was now discussed openly.

Moreover, the government was also in the process of establishing a call center to guide the women who felt shy to visit the hospital.

Earlier, the First Lady also distributed trophies among the excelling players as well as the management of the awareness match.

Chief Executive Officer Shifa International Hospital Dr. Manzoor H. Qazi said that breast cancer was the most common cancer in Pakistan as one in nine women was at risk of developing breast cancer in their lifetime.