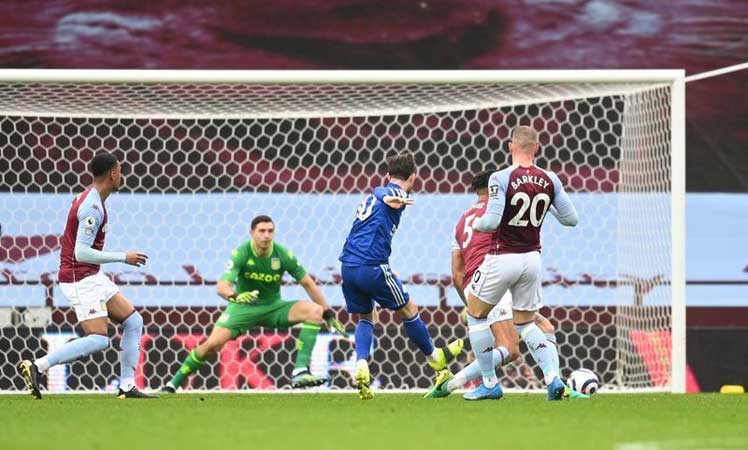 LONDON: James Maddison and Harvey Barnes scored quick-fire first-half goals as Leicester City notched up a 2-1 win away to Aston Villa to go second in the Premier League table, with third-placed Manchester United set to face Newcastle United later on Sunday (Feb 21). Villa suffered a blow before kick-off when playmaker and captain Jack Grealish was ruled out with a leg injury, and Leicester were quick to exploit his absence. With England manager Gareth Southgate watching from the stands, Maddison put Leicester into the lead in the 19th minute, picking up a pass from Barnes before curling a low, bouncing shot into the bottom corner. Barnes made it 2-0 four minutes later, reacting quickest to lash a rebound from a Jamie Vardy shot high into the net. “We knew they’d be up for it, so we knew we’d have to start fast. It was part of our game plan. We knew if we’d get shots in and around the box we’d have a chance,” Barnes told Sky Sports. “I’ve added goals to my game and I’m really happy with that. It’s down to confidence.” Villa struck back three minutes into the second half as Matt Targett’s cross was helped on by John McGinn. Bertrand Traore was on hand to drill the ball into the net.

Maddison left the field with what looked to be a hip injury in the 64th minute, but Leicester continued to create chances. Vardy was unlucky not to score with a shot that flew across the face of the goal and wide. Without Grealish, Villa had little to offer in attack as the visitors held on comfortably to win. The victory sees Leicester move past Manchester United and into second on 49 points, seven behind leaders Manchester City and three ahead of United. Aston Villa are eighth on 36 points.