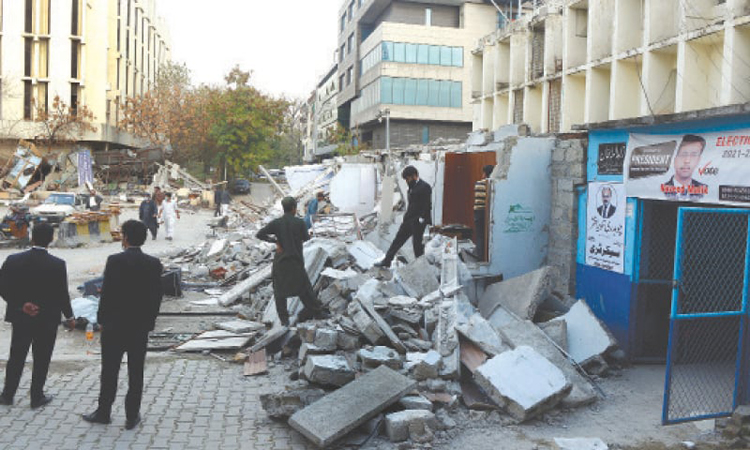 The Capital Development Authority (CDA) has issued a final notice seeking removal of “lawyers chambers” and “other illegal structures” that have been built around F-8 Markaz in Islamabad before the deadline for their voluntary removal expires on February 28.

According to advertisements appearing in newspapers, in case of failure to remove said structures voluntarily upon the deadline CDA would be forced to demolish them “in accordance with Section 49-C of the CDA Ordinance-1960 and all other enabling provisions”.

The CDA’s directives follow an order of the Islamabad High Court (IHC) on February 15 demanding demolition of all illegally constructed chambers of lawyers on the premises of the district courts in the federal capital.

“The encroachments on any state land and any construction thereon in violation of the Ordinance of 1960 and the rules or regulations made there under are illegal, void and liable to be removed forthwith,” ruled the IHC larger bench headed by Chief Justice Athar Minallah.

The IHC’s own order came subsequent to a violent lawyer protest on February 8 against demolition of illegal chambers erected by them in the premises of the district courts.

The lawyers also mistreated and manhandled journalists who were trying to cover their protest.