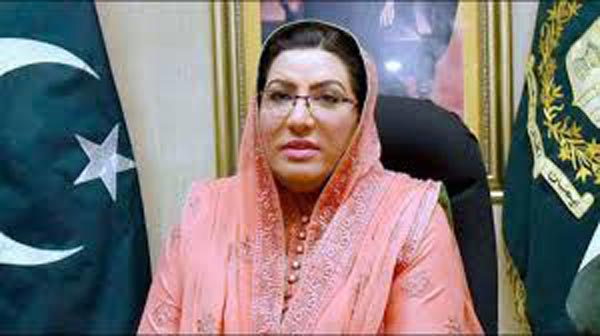 Special Assistant to Chief Minister on Information Dr Firdous Ashiq Awan has said that those who used to chant slogans of ‘vote of izzat do’ (give respect to vote) are not ready to accept the success of the Pakistan Tehreek-e-Insaf (PTI) candidate in NA-75 by-polls.

Addressing a press conference on Saturday, Firdous said that it is surprising that on the one hand, PML-N is celebrating its victory in Wazirabad while on the other, it is accusing the government of rigging the by-election in Daska. All this shows the double standard of the PML-N. She said despite being in power in KPK, the PTI never trespassed in the election process the way PML-N used to interfere.

The special assistant said the 45-kilometer constituency includes remote areas as well as 3 provincial constituencies. All the presiding officers had conveyed the results to the returning officer through WhatsApp on the same night according to which PTI candidate Ali Asjad Malhi won the election by securing 110,957 votes while PML-N candidate Nosheen Iftikhar got 101,879 votes, she claimed.

While criticising the media for announcing the victory of the PML-N candidate without any authentic proof, she said, “There are black sheep everywhere and we have to deal with them.” The PEMRA is being approached to take action against the black sheep in the media who misreported the election result so that they could be asked about the sources of their misreporting, the SACM said.

Dr Firdous said in the by-election of Daska, PML-N found an empire of their choice that was facilitating them to steal the election process. Honest officers were threatened in the by-election as such traditions had been learnt by PML-N Vice President Maryam Nawaz from her father, former prime minister Nawaz Sharif.

The special assistant alleged that both the district returning officer (DRO) and district monitoring officer (DMO) willingly ignored shenanigans of PML-N to encourage its hooliganism. They, on the other hand, heavily fined supporters of PTI candidates. Similarly, PML-N goons threatened polling staff and resorted to firing to influence the election process, she added. The SACM said the DRO and DMO imported from Ahsan Iqbal and Khawaja Saad Rafique constituencies respectively were seen sabotaging the election process and it was astounding why the Election Commission didn’t take action against such dishonest elements. She said the Election Commission is a prestigious institution hence we don’t want to relate the biased and inclined behavior of DMO and DRO with the Election Commission.

Dr Firdous alleged that Ahsan Iqbal, Mian Javed Latif, Uzma Bukhari, Atta Tarar and other PML-N leaders dictated DRO for the whole night to make the election controversial. When the RO had received Form 45 then why he didn’t announce the result, she questioned. The SACM said the PTI government strongly condemns the loss of precious human lives and sides with its workers tortured by PML-N goons. She said the people arrested for shedding the blood of innocent people in Daska were from PML-N. Those who were responsible for creating chaos would be held accountable for their misdeeds, she further said.