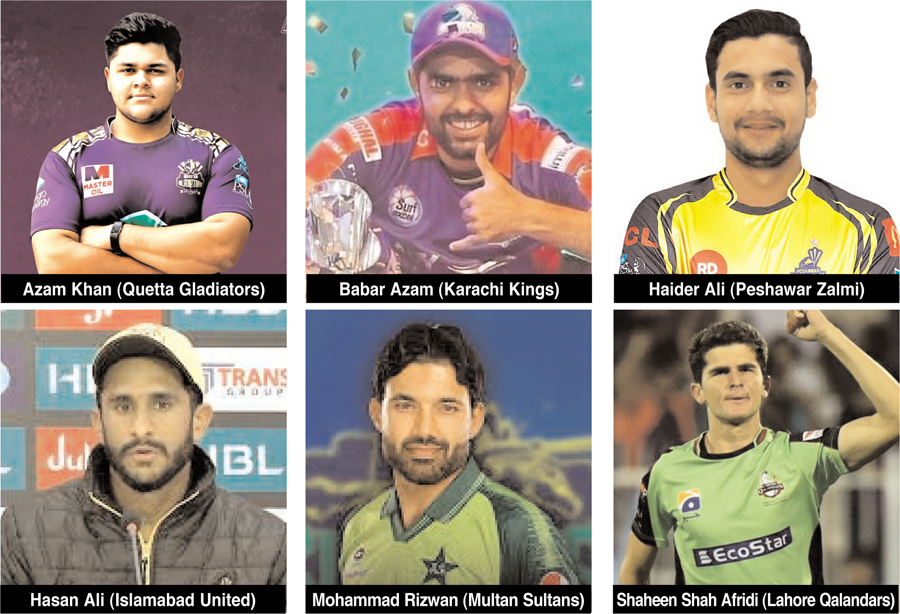 LAHORE: There are a number of top players featuring in HBL Pakistan Super League 2021, but there are six players who can prove critical and decisive in their respective side’s quest for the biggest prize in Pakistan cricket’s marquee’s event.

Azam Khan can be the next big thing from HBL PSL 2021. He has been on the selectors’ radars, who think he can give Pakistan the much-needed power-hitting in the middle and late overs of a Twenty20 International. However, Azam needs to attain complete fitness and a good show in the HBL PSL 2021 that can edge him closer to Pakistan’s ranks. Two years ago when Quetta Gladiators owner Nadeem Omar announced Azam could be Pakistani Chris Gayle, very few people took him seriously but those who had watched Azam’s clean hitting believed him. Azam has a pedigree for being World Cup winner, all he needs to do is to match the hard work of his father Moin Khan, known for being one of the fittest cricketers ever to represent Pakistan.

Azam played in just one match, scoring 12 runs in the HBL PSL 2019. But, the 2020 edition highlighted his talent as he thrilled the Karachi crowd with a blistering 33-ball 59 against Islamabad United. Although he ended up with a not-so-prominent 150 runs in the tournament, he demonstrated he had the talent to go places. Azam can hit big and long. The best thing about him is that he remains nonchalant, never caring who the bowler is. After hitting a six, he never shows his emotions or excitement as if that is just his habit. Watch out for Azam. He knows how to hit it big.

“I see Babar Azam is batting on a different pitch to everyone else …. Class!”, remarked former England captain and reputed commentator Nasser Hussain last year. His fractured thumb had deprived fans in New Zealand of his artistry at the batting crease last year and they lament that. But the thumb is back in shape, a big thumbs up for the fans to watch the best of Babar in HBL PSL VI. Pakistan all-format skipper is touted around the world. He plays it late, plays it to perfect timing, like a Swiss watch, and leaves bowlers in a state of hypnotism as to how easily he dispatches the ball to the boundary. Till recently, he was the only batsman at international level to be in the top-five rankings in all three formats.

Just like Pakistan look to Babar for runs, Karachi Kings will depend on him to give solid starts. He has represented Karachi Kings in all but the first edition in 2016, when he was with Islamabad United. Babar’s 473 in 12 matches at 59.12 and at a strike-rate of 124 formed the basis of Karachi Kings clinching the title last year. He eased them to the title with a solid half-century in the final. With 1,516 in 47 matches at 37.90 and at a strike-rate of 118, Babar is only second behind cousin Kamran Akmal in scoring most runs in HBL PSL history. Fans are in for a treat as Babar promises to be one to watch out for in HBL PSL VI.

Haider Ali, the former Pakistan U19 star batsman, is another player who has made it big through the HBL Pakistan Super League. The Attock-born managed 239 runs in 10 innings at an average of 26.55 in the 2020 edition, that caught the attention of then chief selector Misbah-ul-Haq with his astronomical strike rate of 157.23. Haider was selected for Pakistan’s tour of England and when he was given a chance in the third and final Twenty20 International, he made an instant impact, smashing a 33-ball 54. That became the highest score by a Pakistani on a T20I debut. Haider has the talent, in fact, he is loaded with talent and when he bats, he literally makes it look simple and easy. Haider has the power to clear any boundary and he has shown this trait to the hilt at international level as well.

Anything short or anything pitched up, Haider hurries into a shot and clears the boundary. Fans love those who hit big and long and Haider is also getting popularity amongst Pakistani fans for this ability. Pakistan tried Haider as an opener in the last T20I against South Africa. Peshawar Zalmi can also use that ploy to get a robust start.

Hasan Ali is truly a product of HBL Pakistan Super League. He was inducted in the Peshawar Zalmi squad as an Emerging Player in the inaugural edition in 2016. Next season, he grabbed 12 wickets in 11 matches to herald his arrival. Just over a year, Hasan became a star with a stellar Player of the ICC Champions Trophy 2017 award, helping Pakistan to the title. Hasan’s name was everywhere as he was the main wicket-taker in middle overs of a one-day match. Hasan has progressed by leaps and bounds. Soon after an unimpressive ICC Men’s Cricket World Cup 2019, Hasan had a spate of injuries that kept him out of action. He, though, returned with a bang, collecting the Player of the Quaid-e-Azam Trophy award with 43 wickets and 273 runs that included a fighting century in the final that resulted in the first-ever tied first-class final.

Once back in Pakistan fold, Hasan was at his superb best. He helped Pakistan win the second Test with a maiden 10-wicket haul in Rawalpindi. He was again the star for Pakistan in the third and final Twenty20 International in Lahore, claiming two wickets and then hit two sixes and a boundary in the penultimate over to anchor the win. Fans love his celebration style, imitating a generator exploding to power as he pumps the blasting machine. After five seasons with Peshawar, Hasan has now joined Islamabad United for HBL PSL 2021. His induction will be key to change the fortunes of two-time champions, who finished an abysmal sixth last year.

Mohammad Rizwan is in the form of his life. Everything his bat touches, turns into gold. He has shown in all three formats that he can be a destructive player. Rizwan was never regarded as a player for the shortest format before last year. That was evident in his non-selection for Karachi Kings in the HBL Pakistan Super League 2020. Critics believed his inability to hit sixes was a major reason for him being benched on most occasions. But since he was inducted in the Pakistan team on the tour of Australia in 2019 and then to England last year, Rizwan’s luck and status have changed. He has been the leading run-getter for Pakistan. This ultimately earned him the PCB Test Cricketer of 2020 award. Admirably, he transformed his longer format form into the shortest one with aplomb and aggression. It started at Napier where he castigated the best New Zealand bowlers at will, scoring 89 runs in a consolation win.

He continued as an opener in the T20I series against South Africa. Rizwan made that series his own, cracking a maiden undefeated hundred in the opening match and followed it up with scores of 51 and 42 – a total of 197 in Pakistan’s series win. That richly earned him the Player of the Series award. Taking stock of his rich form, Multan Sultans took a bold decision to appoint him as captain. He has the experience of leading Pakistan in New Zealand. Rizwan is expected to take that responsibility in his strides and take the attack to the bowlers. He has form in support and the will to prove his HBL Pakistan Super League detractors wrong.

The lanky paceman has made a name for himself. He is the lynchpin in Lahore Qalandars’ attack as he is for Pakistan in international matches. Shaheen can make the ball dance to the tunes of his left hand. His height is an added advantage, bombarding lethal yorkers and ferocious bouncers. It was a story of “he came, he saw, he conquered” for Shaheen in 2018. He devastated Multan Sultans with unbelievable figures of five for four, and next month he was in Pakistan team playing against the West Indies in the home Twenty20 series. Since then he has become an all-format, go-to-bowler for Pakistan. He was in superb form in the ICC Men’s Cricket World Cup 2019, grabbing 16 wickets in just five games.

When the entire HBL Pakistan Super League was played in Pakistan last year, Shaheen was in a starring role for Lahore Qalandars, taking 17 wickets – the most in the league. His devastating bowling helped Lahore finish runner-up. This year too, Shaheen will be the stand out bowler for his team and fans will continue to watch his typical style of celebration, arms wide apart and both index fingers up.