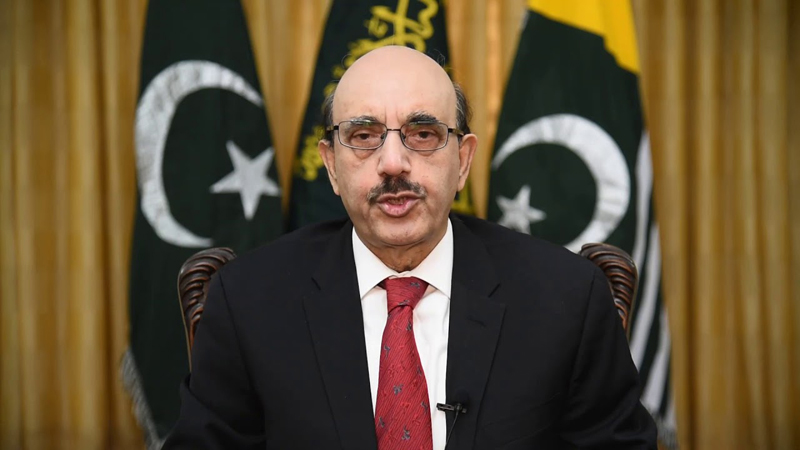 The Azad Jammu and Kashmir (AJK) President Sardar Masood Khan has said that in spite of numerous odds and challenges, Pakistan is considered among the big countries of the world and no decision can be made on the international level without the assent of Pakistan.

“The Pakistanis must not consider themselves to be inferior as India fears only Pakistan in the region and its proof is that on the one hand, India is engaged in plots to weaken and destabilise Pakistan while on the other, it has deployed a big chunk of its army on our eastern border and in occupied Kashmir,” he asserted.

The president questioned if India does not face any danger from Pakistan, why it has made such a big military concentration around the country.

Addressing a gathering of teachers and students at the University of Haripur on Friday in connection with the Kashmir Solidarity Week, the state president said that India is scared of Pakistan’s potential to become a powerful country.

He said that if we are determined to safeguard not only the geographical boundaries but the ideological borders of our country, we would be able to liberate Kashmir from India without which Pakistan would remain incomplete.

“The people of occupied Kashmir have been offering unprecedented sacrifices since 1947 to become part of Pakistan, and they are still giving their blood by holding the Pakistani flag in their hands. A similar spirit for Kashmir is visible among the Pakistani youth right from Karachi to Khyber and Gwadar to Khunjarab.

Addressing directly to the students, Sardar Masood Khan urged them to, side by side getting an education, they should expose India’s false narrative, and promote their own objective narrative by reaching out to their international peers.

About the latest situation of occupied Kashmir, the AJK President said that India had illegally settled in the disputed territory more than two million of its Hindu citizens within a short span of eight months in order to change the demography of occupied Kashmir and to turn it into a Hindu majority state. This exercise under the Hindutva policy warrants us to rise to save our Muslim Kashmiri brethren from the Indianization of the territory.

He stressed the Pakistani students to complete their education, and turn Pakistan into a strong and stable economic and military power, and on the other hand, take the voice of Kashmiri people in every length and cranny of the world by using social media and other means of communication.

Khan thanked the vice-chancellor and the teachers of the University of Haripur for observing Kashmir solidarity week and establishing a Kashmir desk in the institution.