Inside Bella Thorne and Zendaya’s past feud and friendship

* 'It's like we said a couple interviews when we were younger, how we explained how in the first season we weren't friends and it took us those other two seasons of becoming so close' 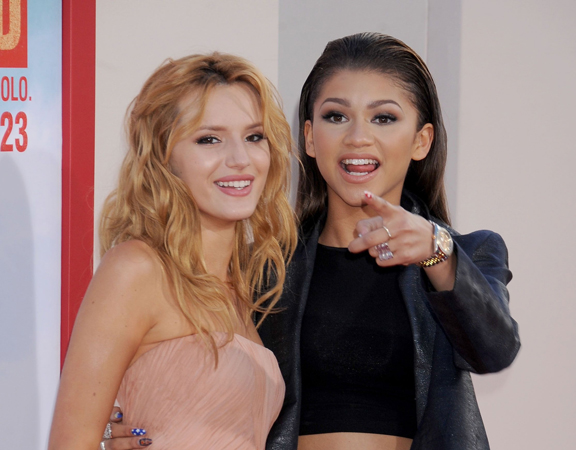 Bella Thorne and Zendaya weren’t always friends. Between 2010 and 2013, the then-teenage stars played BFFs on the Disney Channel Series Shake It Up! But behind the scenes, things were shaken up for real between the actresses, Bella, 23, recalled to Us Weekly, in comments published on Wednesday, Feb. 17.

“It’s like we said a couple interviews when we were younger, how we explained how in the first season we weren’t friends and it took us those other two seasons of becoming so close,” she said. “Not having someone pitted against you and then all of a sudden, now everyone is pitting you against each other. That fed into our heads. It made us not friends in that first season.”

However, the actress and “SFB” singer said that she and Zendaya worked things out in a “beautiful talk in the middle of a sound stage” as they filmed an episode of the Disney Channel Series Good Luck Charlie in 2011. Bella told Us Weekly, “We were really able to put our cards out on the table and understanding each other.”

Zendaya, 24, and Disney have not commented on Bella’s remarks, which echo comments she made in an interview with preteen and teen outlet J-14 in 2015.

However, the actress and ‘SFB’ singer said that she and Zendaya worked things out in a ‘beautiful talk in the middle of a sound stage’ as they filmed an episode of the Disney Channel series ‘Good Luck Charlie’ in 2011

She continued, “And then second season we kind of just had this tell-all talk where we started crying and really just put everything out there on the table, and that’s when we became best friends.”

Bella and Zendaya did in fact act like besties off the set. In 2011, Bella told the BBC, “Z is not even my best friend. She’s my sister and I couldn’t do anything without her.”

The pair’s onscreen friendship was so popular with fans, who often dubbed them “Zella,” that it helped them land another side project, a 2012 Disney Channel Original Movie titled…Frenemies. Meanwhile, Bella and Zendaya promoted Shake It Up! at home and abroad, meetings fans and signing autographs at places like a supermarket in England and a shopping mall in Dubai.

“Zendaya and I make a new favourite friendship memory every single day,” Bella told Seventeen magazine in 2012. “Even our handshakes are based off of memories! But more than anything, I love traveling with Zendaya. It gives us the chance to talk for hours. We watch funny videos on my computer, talk, and laugh so hard.”

Bella and Zendaya were occasionally pitted against each other by the press and social media, when it came to their looks. In 2013, Seventeen’s prom issue featured dual covers, each featuring one of the actresses.

The following year, the magazine ran a cover interview with Bella, in which she said, when asked about Zendaya, “The truth is we are so different, there is no competition. And when people tried to compare us or turn us against each other, we’d just talk about it, and then everything was cool. We love each other.”

The actresses would go on to reunite onscreen in 2015, when Bella guest starred on an episode of Zendaya’s new Disney show K.C. Undercover.

“You make me laugh non-stop 24/7,” Zendaya told Bella in a joint Tiger Beat YouTube interview while on the series’ set. “Everything’s a joke…literally everything. She could be just looking at me and just make me laugh, which is probably the best part.”

Bella joked, “I guess I have one of those faces,” to which Zendaya replied, “No, you make those faces.”

During the interview, Bella said she was happy to have their “good old girl talks” again.

In 2017, a tweet comparing the two actresses with a chic pic of Zendaya and a less flattering Snapchat selfie of Bella, went viral. A year later, so did another tweet comparing the pair’s looks, which also called for fans to take a side in the #beautybattle. Bella replied, “Beauty battle? That’s not right. Damn it’s been years and people still wanna pin us against each other in some way. 🙁 love you z.”

In 2019, Bella drew controversy when she shared nude photos of herself in retaliation against an alleged hacker who threatened to blackmail her. On The View, Whoopi Goldberg criticized the actress for taking the pics in the first place, while many other celebs rallied behind Bella.

She shared some of their supportive messages, including a text from Zendaya, who wrote, “Just a reminder that you are strong and courageous and beautiful inside and out,” her text reads, according to a screenshot. “You broke my heart with that damn ig post but anyway, just being a sap right now lmao just letting you know you’re a light and I’m super proud. Love you.”

In 2020, Bella talked again about being pitted against Zendaya in the press. “People love, you know, putting women against each other,” she told Entertainment Tonight. “It’s been happening to me and Zendaya…since we started the damn show, you know, like it’s no surprise.”

She also offered words of support for her former co-star over her first Emmy nomination, for her role in HBO’s Euphoria. “I mean, my goodness,” she said, “I just hope she wins.” Zendaya did win the award.