Staff-level accord with IMF to spur economic growth: Hafeez 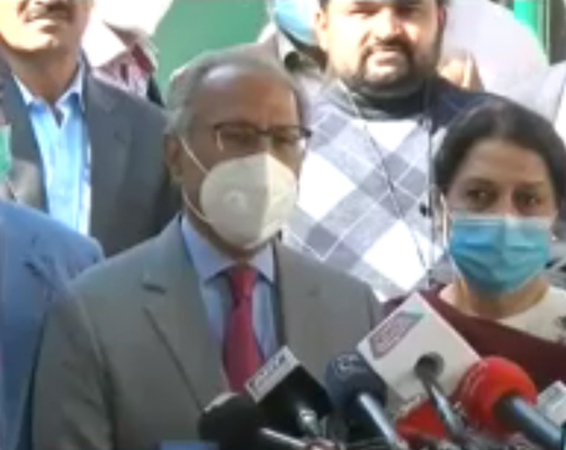 Talking to media persons outside the Election Commission of Pakistan, he said owing to this agreement, investors from across the world and capital markets would be attracted towards Pakistan.

It is pertinent to mention here that the IMF and Pakistan reached the staff-level agreement on second to fifth reviews of country’s reform programme under ‘extended fund facility’. This agreement is subject to the approval of the IMF’s executive board and after the completion of reviews around US$500 million would be released.

Hafeez Shaikh while talking about the Senate elections, said it was democratic right of every individual and party to hold their opinion and take part in elections.

“Ultimately the electorate; and in our case, the members of National Assembly will decide who will be the member of Senate,” he said and expressed the hope that Pakistan Tehreek-e-Insaf would win.

He said Prime Minister Imran Khan had only one interest that was to make Pakistan prosperous and increase its respect on the globe and added it was the main factor which distinguished the PTI and its leadership from other parties.

Special Assistant to PM on Revenue Dr. Waqar Masood on Wednesday said that with the effort of PTI-led government the tax net collection has been increased by bringing reforms in the FBR (Federal Board of Revenue) and country’ economy was putting back on fast track.

Talking to a private news channel, he appreciated the efforts of FBR for expanding the tax net and facilitating the tax payers, adding, FBR would achieve the revenue target set for the current year and the economic activities would further improve in coming four months.

He also mentioned that in the month of January almost 13% increase in tax collections was witnessed, adding that the fruits of improvement in the economy would reach the common man soon.

Replying to a question, he said PTI-led government has no plan to bring mini-budget and government would not impose any new taxes in the upcoming budget for the fiscal year to facilitate the industry and help check contraction of economy.

Talking about tax theft in sugar mills, he said that FBR has decided to install internet protocol cameras at different manufacturing sectors including Sugar mills to undertake real-time monitoring of production process in a bid to curb tax evasion. “We have given special focus on the IT tools for expanding the tax net, he said, adding, reforms in FBR and revenue collection are targets besides expanding tax network across the country”.

To another Question about doubtful transaction of money, he replied that Federal Board of Revenue has already notified provisions making it mandatory for ordinary citizens to show computerized Identity Card in case of purchase over Rs50,000 from a registered sales tax seller. Citizens should utilize their CNIC cards while transaction of heavy mount, he said, adding, this condition will help avoid, unverifiable and fictitious business buyers which results in huge sales tax losses in the value chain.