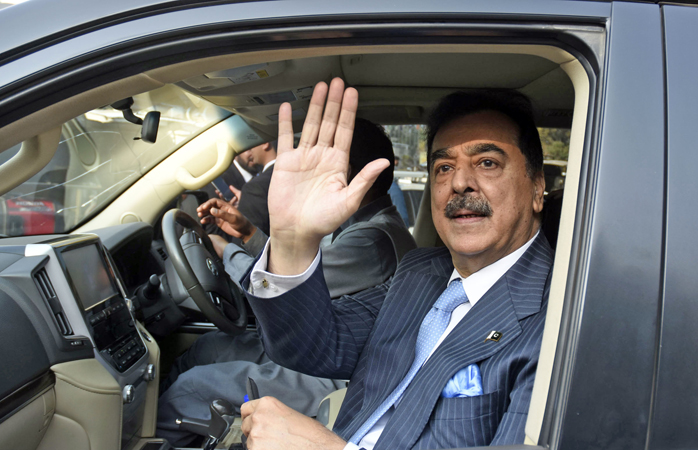 The returning officer (RO) on Wednesday reserved the verdict in a plea filed by PTI seeking the rejection of the candidate papers of former prime minister Yousaf Raza Gilani, a private TV channel reported.

The RO heard a plea filed by PTI leader Fareed Rehman urging the ECP to reject the nomination papers of Gilani, the joint candidate of PDM from Islamabad, as he was convicted by the Supreme Court. The hearing was held twice after the RO granted time to the PTI leader’s lawyer to come up with the arguments.

At the early morning hearing, the RO granted time to the PTI leader till 3pm to come up with arguments in the case. When the PTI counsel sought extra time, it was opposed by Gilani’s lawyer. The former prime minister’s lawyer contended that his client has completed the sentence given to him by the Supreme Court. He added that after completing the sentence, Gilani is eligible to contest the election. “Yousaf Raza Gilani’s disqualification had ended in 2017,” said the lawyer.

However, the returning officer rejected the argument and granted time to the petitioner’s lawyer to submit his argument by 3pm in the afternoon. When the hearing resumed at 3pm, the PTI leader, through his lawyer, contended that the former prime minister does not meet the criteria as defined by articles 62 and 63 of the constitution. He also argued that the PPP leader’s nomination papers be rejected as NAB is hearing the Toshakhana reference against him. He alleged that the former premier ‘abused’ his powers as a prime minister. “Violation of PM’s oath leads to lifelong disqualification,” said the PTI lawyer, adding that as cases are being heard against the former prime minister, he should not be allowed to contest the elections.

However, Gilani’s lawyer intervened and claimed that the case against his client was filed to carry out his media trial. He added that the PTI lawyer is only giving references of cases that are under trial. He further told the RO that if a case is under trial, it does not mean that Gilani’s nomination papers should be rejected. The lawyer also told the RO that the sentence given to Gilani lasted less than five minutes.

The RO, after hearing the arguments, reserved the verdict in the case and adjourned the hearing till 9am today.

The Election Commission of Pakistan (ECP) on Wednesday continued scrutiny of nomination papers, approving Senate candidature for some of them while withholding and rejecting the papers filed by others.

The nomination papers on seats reserved for minorities in Senate were also reviewed and approval was given to the candidature of Ranjit Singh, Gurdeep Sindh, Arish Kumar, Asif Bhatti and Javed Gul.

On technocrat seats, the nomination papers of Dr Humayun, Dr Iqbal Khalil, Barrister Muhammad Ali Saif and Dilroz were approved while the decision on papers of Hamid ul Haq, Farhat Ullah Babar, Nasrullah, Zubair Ali, Rehan Alam, Dr Shaukat Jamal Amirzadah and Dost Muhammad Mehsud was reserved as they were summoned on Thursday (today). The nomination of Malik Najab Gul was rejected during the scrutiny process while a decision on the candidature of Abbas Afridi was reserved and he was summoned on Thursday.

It is pertinent to mention here that the ECP on Monday had announced that overall 170 nomination papers had been submitted from across the country for the upcoming Senate election. Giving a province-wise distribution of nomination forms, the commission had said that 51 candidates filed nomination papers from Khyber Pakhtunkhwa (KP), 41 from Balochistan, 39 from Sindh, 29 from Punjab and 10 candidates from Islamabad.