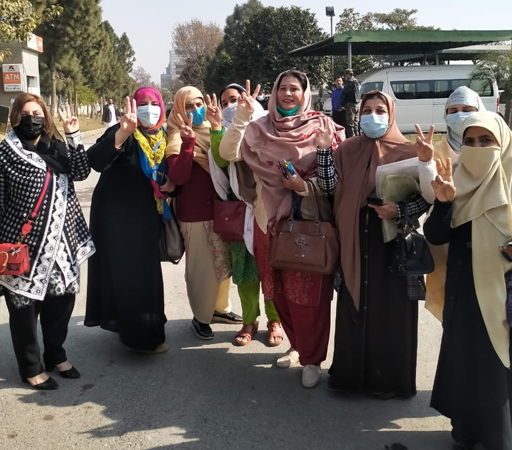 The Islamabad High Court (IHC) on Wednesday suspended the notification of Federal Directorate of Education (FDE) Islamabad pertaining to repatriation of teachers on deputation and summoned FDE director general in person on next hearing.

The court said that the apparently the order of FDE couldn’t be sustained and asked its DG to explain on next hearing that why such notification was issued.

Chief Justice Athar Minallah heard the case on a petition moved by deputation teachers against their repatriation. The chief justice observed that the deputationist teacher could join their duties immediately under the wedlock policy. The court issued stay order against the FDE notification which had directed the teachers to go back to their parent departments in provinces. Expressing annoyance, the court observed that FDE director legal had no knowledge of law, adding that the director had been trying to misguide the court. The teachers were forced to stage sit-in due to such one-sided decisions, the chief justice noted. The court summoned DG FDE in person and directed him to explain that why the teachers working here before the 2006 were being perturbed. The court adjourned hearing of the case till March 9.

Court summons FDE director general in person on next hearing

Director Law Azam Gakhar, while raising objection, said deputationist teachers are not civil servants. Teacher’s counsel GM Chaudhry briefed the court that ad-hoc policy exists, adding that sending these teachers back to their native towns is against the law. The court while addressing Director Law Azam remarked, “you are misguiding the court. Surely you might have misguided the DG.” The CJ IHC inquired under what law the advertisement has been given in the press in connection with the deputation. “The advertisement is flagrant violation of 18th Constitutional Amendment. No department is allowed to interfere in provincial matters. You invited applications from people by giving advertisement. You committed contempt of court,” he said.

The CJ IHC while addressing FDE director law remarked that “you don’t know about your legal and constitutional jurisdiction. The teachers who have served from 1998 to 2021 cannot be declared ineligible through an order based on malafide intent. If this order is accepted as correct then we will have to take action against those who kept on giving extension for three years each continuously.”