Copenhagen’s feel good factor hits you the moment you arrive

* Built in 1843 by King Christian VIII to entertain his citizens and distract them from politics, the park later inspired Walt Disney to create Disneyland 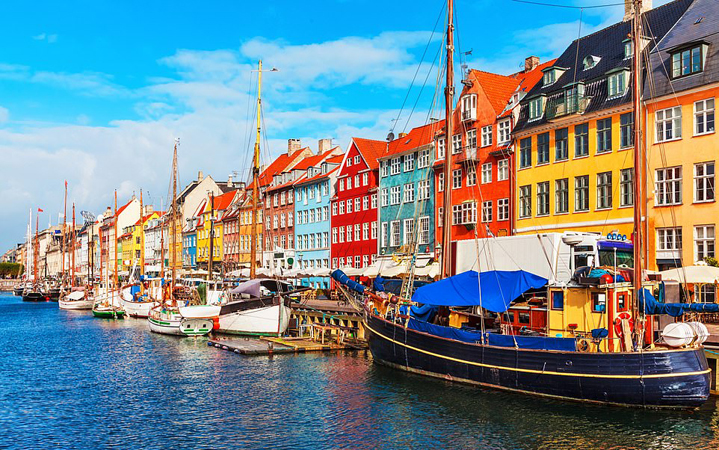 Within moments of arriving by train in Copenhagen, I am already smiling. The central station is steps away from the fairy-lit utopia of Tivoli Gardens, the second-oldest operating amusement park in the world, and shrieks of delight from its rollercoasters are often the first sound visitors hear.

Built in 1843 by King Christian VIII to entertain his citizens and distract them from politics, the park later inspired Walt Disney to create Disneyland. It is now an idyllic fantasy land of open-air theatres, fairytale rides, flower-filled gardens for picnicking, boating lakes and castles.

Surely only Denmark – routinely voted the world’s happiest country – could devote such a prime chunk of its capital city to good old-fashioned fun.

The pursuit of happiness isn’t a throwaway marketing catchphrase here but a way of life. Flat, city-wide cycle lanes mean more residents commute to school or work on bicycle than by any other mode of transport. Gleaming outdoor pools perched on the harbour’s edge are free for quick dips before work while electric sailboats can be hired to cruise the capital’s maze of canals as you sip a cool drink with friends.

With such a tangible commitment to contentment all around, only Copenhagen – in the middle of a global pandemic – could unveil a museum dedicated to happiness.

Down a side road close to the pedestrianised shopping street of Stroget, the unassuming Happiness Museum opened last July and considers how we can achieve this most elusive state.

‘We like to say it’s a small museum about the big things in life,’ says curator Meik Wiking. He is also author of the bestselling book that first introduced the world to the cosy Danish concept of ‘hygge’ in 2016.

‘Happiness is a complex term you can look at from many angles, so hopefully people leave here a little wiser and a little happier and perhaps motivated to make the world a bit better,’ he says.

The museum’s white-washed rooms showcase exhibits tracing the history of happiness, from Aristotle’s belief that a good life must be a meaningful one, to the mystery of Mona Lisa’s enigmatic smile via the commercial clout of a McDonald’s Happy Meal.

Along the way there are surveys to complete to help shape future exhibits and interactive games to test various theories, including whether having too much choice makes us miserable.

Another display examines exactly why Denmark is so happy and reveals the benefits from excellent healthcare, education, work/life balance and public leisure facilities that far outweigh its sky-high taxes and long, dark winters.

Yet the most thought-provoking exhibit is the easiest to overlook. A corridor hidden away at the back of the museum is plastered with Post-It notes on which visitors have left their definitions of happiness, from the sublime ‘days that smell like summer’ to the ridiculous ‘playing Roblox’ – presumably that’s from a young gamer who’s been dragged away from his console and is not too happy about it.

Outside, Copenhagen’s taste for the good life is evident at every turn. Organic street-food market Reffen usually buzzes with students, children bouncing on trampolines built into pavements and canal-boat tours slinking past a 400-year-old brewhouse on Slotsholmen Island that once provided every soldier in the king’s army with a gallon of beer each day.

Glorious sunshine during my visit meant the harbour path was filled with locals ordering drinks outside waterfront bars and dragging kayaks into the water, even though it was the middle of a weekday. No one looked stressed about being away from their desk.

Follow the Danes’ lead and hire a bike to judder over the cobbled courtyards of stately Christiansborg Palace, built on the site of the 15th Century Copenhagen Castle as a home for Denmark’s royal family.

Rebuilt twice after devastating fires, it now houses the Danish parliament, the prime minister’s office and the Supreme Court of Denmark, but is still used by the royals to host foreign dignitaries.

Visitors can peek into the lavish Throne Room, pass the Alexandra Hall used for official dinners and marvel at the covetable collection of gleaming copper pans in the former Royal Kitchen, which is laid out exactly as it was to prepare the gala dinner marking the king’s silver jubilee in 1937.

Stop off at the DOP stand next to the medieval Church of the Holy Ghost for a traditional Danish hot dog loaded with crispy roast onions. Afterwards, continue along the harbour promenade past Amalienborg Palace to Copenhagen’s best-known sight – the century-old bronze statue of the Little Mermaid, which gazes serenely out to sea from the rocks and was inspired by a fairy tale written by city resident Hans Christian Andersen.

Back at my hotel, the Villa Copenhagen, which occupies the city’s former main post office, there’s time for a dip in the rooftop pool. From here, swimmers can see Tivoli Gardens as its wooden rollercoaster clatters by, accompanied by the elated screams of passengers. Happiness. And, my goodness, we could all do with some of that.