New York Fashion Week is back for another season of shows

* The coronavirus pandemic only accentuated this trend 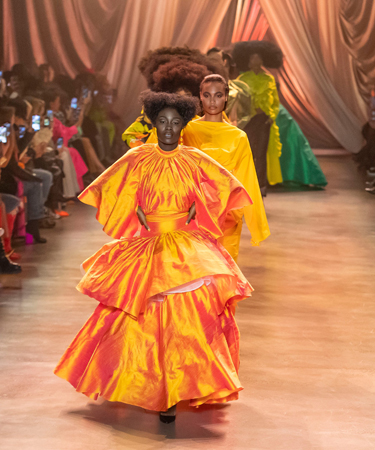 When the Council of Fashion Designers of America (CFDA) chairman Tom Ford announced earlier this year that the organisation would no longer publish an official New York Fashion Week schedule but rather an “American Collections Calendar,” the news confirmed something bigger than an administrative update.

New York Fashion Week was once the main stage for American designers, but this notion has been unbuckling for years as a number of designers have chosen to show elsewhere or outside of the official calendar dates.

The coronavirus pandemic only accentuated this trend. Travel bans and other logistical and health and safety challenges associated with large events have turned the idea of a fashion week in any city into a fairly loose concept, with many designers opting for short films or other creative presentations in place of live shows.

New York Fashion Week, which began on Sunday, will be almost entirely digital again and will not feature a number of high-profile designers whose shows once held prime spots on the schedule: Ralph Lauren, Marc Jacobs, Michael Kors and Calvin Klein are all absent, with future plans mostly under wraps or vague.

New York Fashion Week, which began on Sunday, will be almost entirely digital again and will not feature a number of high-profile designers whose shows once held prime spots on the schedule: Ralph Lauren, Marc Jacobs, Michael Kors and Calvin Klein are all absent, with future plans mostly under wraps or vague

In a letter published at the end of January, Ford, who is also head of his own eponymous label, wrote: “Wherever or however American designers choose to show their collections, it is our job as the CFDA to honour our original mission statement and to help promote and support American fashion. Therefore, we will publish on the schedule not only the schedule of designers showing in New York during New York Fashion Week but also those of American designers showing off calendar and abroad.”

Ford himself is just one of the leading designers who has made the decision to put on fashion shows in different cities and countries away from the New York schedule. In February last year, Ford took his show to Hollywood, staging a celebrity-packed event on the Friday of Oscars weekend.

Gabriela Hearst, who launched her brand in New York, made the move to show during Paris Fashion Week last October, citing concerns about her company’s carbon footprint, “one of our biggest carbon producers was the transport of our collections, the majority of which is made in Italy,” and the prestige of showing in Paris: “it is always a dream for any designer to show in Paris. This is the time for us to manifest this dream.”

Tommy Hilfiger has also been known to stage shows away from New York in Paris and London during previous seasons.

Steven Kolb, the CFDA’s CEO, acknowledged this growing trend in a phone interview last week. “(Pre-pandemic), as the fashion industry became more global, we started to see some American fashion brands wanting to show outside of New York,” he said.

According to Kolb, these moves were often linked to strategic decisions aimed at growing in a new market, or linking up with the opening of a new store in a different city. But when the pandemic hit, the prospect of showing on the official calendar last September became daunting to some brands that, due to production and cash flow issues, were struggling to produce collections in time for the official schedule.

“It made sense to start thinking about it more broadly,” he explained. “It made sense to embrace those brands that were not part of the New York Fashion Week dates for this particular season.

But, according to Kolb, the changes do not signal the end of New York Fashion Week. Instead, he sees it as a possible opportunity for American fashion on a global stage.

“We would never dismiss the value of a fashion week in a city what that does for the city’s economy – what that means culturally for that city,” he said. “So it’s important for us as we’re talking about the American Collection’s Calendar – this broad, embracing schedule of American designers – that we always highlight and emphasize fashion week, because the validity around that is still important.”

The new American Collections Calendar features a handful of days of mostly virtual shows this week, but it also includes designers who will present collections as late as mid-April.

Zimmerman, a label founded by Australian sisters Nicky and Simone Zimmermann, will be presented from Sydney on Thursday. The label had been showing in New York since 2013 but returned home last season.

Christian Siriano, who treated guests to a poolside show in Connecticut in September, will present his latest collection a week after the New York schedule winds down. Rick Owens, Oscar de la Renta and Thom Browne will show during Paris Fashion Week dates. And Jonathan Cohen, who dressed First Lady Jill Biden on inauguration day, will present his latest designs on April 15.

Jason Wu, one of the few designers to put on a physical runway show so far this year, presented his collection in New York on Sunday night. Models wove their way through perfectly arranged stacks of produce and flowers at “Mr. Wu’s General Store,” during a socially distant event that was also live streamed.

It’s been a year since the first bottles of hand sanitizer were distributed at fashion shows as the reality of the worsening pandemic became more clear. And the ongoing health crisis will continue to disrupt plans across all major fashion weeks in New York, London, Milan and Paris this season as designers face challenges they have come to know all too well.

But some of the pandemic-enforced changes within the fashion week system seen in the last year will be permanent. Kolb believes a lot of the work done to digitize fashion weeks will not be left behind in a post-pandemic world. The CFDA’s virtual home for fashion week, Runway360, will continue to be relevant to the council even when live attendance comes back.

“Digital platforms will live in parallel next to the live shows,” Kolb said.