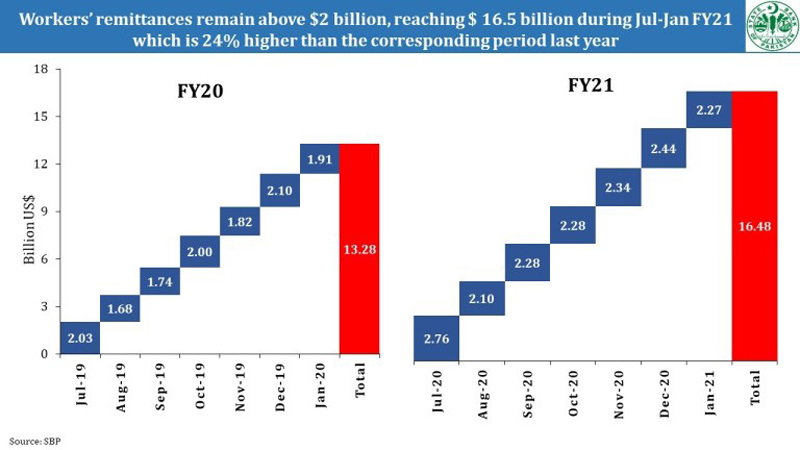 The inflow of workers’ remittances in to the country witnessed 19 percent increase in January 2021, as compared to same month of the previous year.

The remittances remained above $2 billion for 8th straight month as during the corresponding month, the inflow was recorded at $2.3 billion as compared to the inflow of $1.907 billion in January 2020.

On average, the remittances surged by 24 percent during July-January (2020-21) from $13.28 billion in Jul-Jan (2019-20) to $16.476 billion in same period of the current fiscal year, according to data released by State Bank of Pakistan on Monday. The country wise detail shows that the highest inflows came from Saudi Arabia as Pakistan received $553 million during the month as compared to $531.6 million in January 2020 and $624 million in December 2020.

From other GCC countries including Bahrain, Kuwait, Qatar and Oman, the inflows also increased to $271.2 million as compared to $260 million in January 2020.

From Australia the workers’ remittances inflow jumped by about around 89 percent as it increased from $27.4 million to $51.9 million in the corresponding month of current year.

The overall production of petroleum commodities has witnessed an increase of 5.01 percent during the first half of financial year 2020-21 as compared to corresponding period of last year.

The Petroleum, Oil and Lubricants (POL) products that showed growth including kerosene oil production, which increased by 3.83 percent during the period under review, Pakistan Bureau of Statistics (PBS) reported.

However, the production of Jet Fuel Oil has decreased by 37.69 percent, Diesel oil 57.21 percent, Lubricating oil 5.05, Solvent Naptha 21.15 percent and petroleum product NOS 14.18 during the period under review.

On year-on-year basis, the production of POL commodities has witnessed an increase of 23.91 percent during December 2020 as compared to the output of December 2019.

On the other hand, the production of jet fuel oil dipped by 17.92 percent, diesel oil by 11.99 percent, jute batching oil by 5.15 percent and petroleum products NOS by 11.63 percent.

It is pertinent to mention here that the overall output of Large Scale Manufacturing Industries (LSMI) in the country during the first half of financial year 2020-21 witnessed growth of 8.16 percent as compared to the output of the corresponding period of last year.