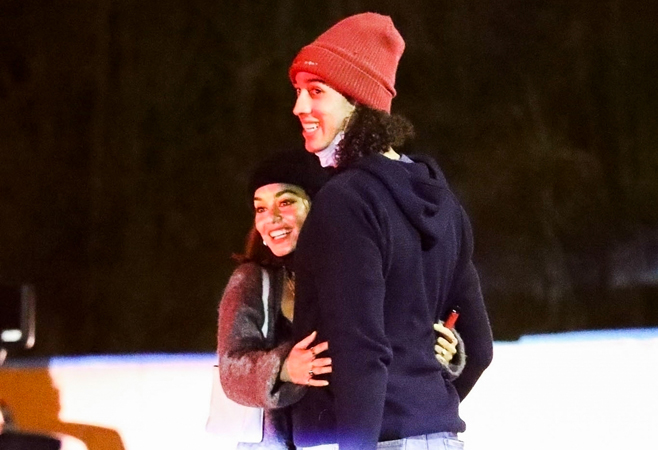 Vanessa Hudgens’ latest post will give you heart-eyes. Sparks are still flying high between the High School Musical star and Pittsburgh Pirates player Cole Tucker. Case in point? The 32-year-old actress made her relationship with the MLB star Instagram official on Valentine’s Day.

“It’s you, it’s me, it’s us,” she sweetly captioned her post on Feb. 14. Along with her post, the Second Act star shared a romantic photo that captured her and Cole sneaking in a kiss.

In the picture, Vanessa looked effortlessly chic wearing a tan-colored tank top with a matching cardigan. She accessorized with a black-and-white Louis Vuitton bucket hat and dainty gold jewelry pieces. As for the 24-year-old athlete? He was dressed just as casually in a black hoodie that he paired with a baseball cap. Naturally, the former Disney Channel star’s followers couldn’t help but gush over her post. Sarah Hyland commented, “YASSSSSSSS.”

“Yes yes yes yes yes,” Sophie Turner responded, with her husband Joe Jonas adding heart-eyes emojis. Back in January, a source told E! News exclusively that Vanessa and Cole were smitten over each other as they celebrated the start of 2021 together. “They are boyfriend and girlfriend,” the insider shared at the time. “They rang in the New Year together.”

Confirmation of their relationship status came only a few months after they first sparked romance rumors.

In late November, the duo was spotted looking cozy as they dined at Pace in Laurel Canyon, Calif. “They had a romantic dinner outside under the stars,” an eyewitness told E! News at the time. “They shared wine and food and had a great two-hour meal. Vanessa was giddy with laughter. She was looking over at Cole and couldn’t contain her smile.”