Kristen Wiig and Annie Mumolo go on a beach romp 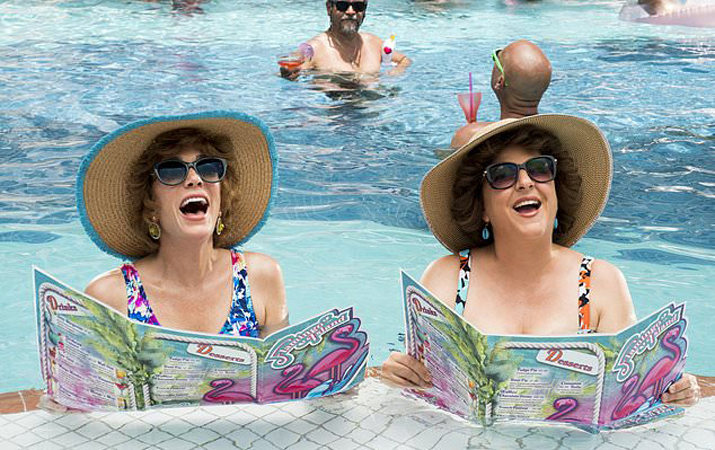 There’s a tiny oasis on the west coast of Florida where the men wear Tommy Bahama from head to toe and women of a certain age stroll around poolside in tube tops and full jewelry.

It’s a “middle-age Nirvana” where crabs talk and you can eat veal-stuffed manatee while wearing your evening culottes and sip tropical drinks served in a mini-aquarium.

This oasis is called Vista Del Mar and it’s the whacky invention of Kristen Wiig and Annie Mumolo, who co-wrote and co-star in “Barb and Star Go to Vista Del Mar,” a gentle salute to women in their 40s getting their groove back.

Wiig and Mumolo, whose “Bridesmaids” was nominated for a screenwriting Oscar, are irresistible this time as two best friends who accidentally get wrapped up in a huge plot to destroy the Florida resort town.

Barb and Star Go to Vista Del Mar” has some pleasant messages – like don’t abandon a friendship over a boy, fight to keep your inner shimmer and you’re never too old to grow. It’s not gross or sharp, unless you find jokes about how tourists like gifts made of shells a little too close to home. Wiig (Star) and Mumolo (Barb) play a particular caricature of a Midwestern woman – the hair is fluffy, they adore character socks and eat hot dog soup. Just a pair of very forgiving and kindly single gals from Soft Rock, Nebraska.

They are members of a Talking Club (run ruthlessly by Vanessa Bayer) and say things like, “It´s so funny to think all the racoons in the world are sleeping right now.” Somehow, the relentlessly optimistic pair don’t get grating for viewers over its 100-minute run time. Director Josh Greenbaum’s work is straightforward, wisely just letting these gals do their thing.

When their careers at a furniture store take a nosedive, Barb and Star decide on a Florida vacation. “Maybe something is telling us to do something different,” says Star to Barb. To which Barb replies: “Should we try those socks with individual toes?”

In Florida, they wander into a revenge plot laid by a James Bond-like villain (also Wiig) who wants to destroy her hometown of Vista Del Mar with killer mosquitos because residents were mean to her as a kid. The tip-off that’s she’s evil comes quickly; her lair has an elevator with a button labeled “Lair.”

There are roles for Jamie Dornan as a love interest, Damon Wayans Jr. as a bumbling spy, Reba McEntire as a water sprite and a hysterical turn by Andy García as Tommy Bahama, who delivers this line without cracking up: “It is time to mount the wind and ride it with the fierceness of a hippopotamus.” Wiig and Mumolo are also behind many of the movie’s songs, including the hotel lounge piano tune “I Love Boobies” and “Edgar’s Prayer,” which is delivered to seagulls. Of course, there are classic beach bum songs, too, like “Cheeseburger in Paradise” and “Key Largo.” The film nicely sends up spy capers, Broadway and buddy movies and is a lot like its two leading characters: Kindly, a little silly and as sweet as a candy-colored drink at the pool bar. “Barb and Star Go to Vista Del Mar,” a Lionsgate release available Friday for rental on cable and digital services, is rated PG-13 for crude sexual content, drug use and some strong language. Running time: 106 minutes. Two and a half stars out of four.