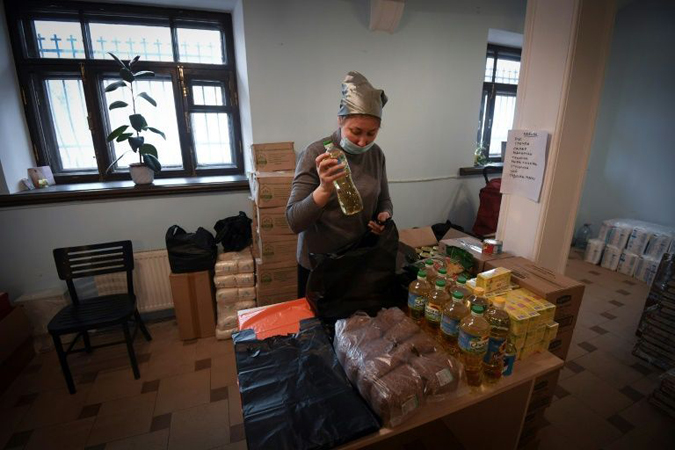 Since the start of the coronavirus pandemic, crowds have grown at the Martha and Mary Convent in central Moscow.

The white-walled women’s monastery houses one of Russia’s best known charities that gives out free food parcels, among other projects.

“Before the pandemic we had around 30 to 40 people a day,” Yelena Timoshchuk, a social worker at Miloserdie (Mercy) told AFP, leaning against a table loaded with bottles of sunflower oil.

Many of the visitors who queue for packages containing buckwheat, sugar, and tea are retired but there are also those who have lost their jobs or had their salaries cut.

The coronavirus pandemic has delivered a new blow to Russia’s stagnating economy, which was already chafing under Western sanctions, low oil prices and weak corporate investment.

Observers say that rising poverty, falling incomes and lack of tangible government support during the pandemic are fuelling discontent with President Vladimir Putin’s two-decade rule and strengthening the opposition.

Answering the jailed Kremlin critic Alexei Navalny’s call, tens of thousands of people have protested across Russia over the past few weeks, and his team plans more protests ahead of parliamentary elections in September.

Russians’ real disposable incomes have been falling for the past half-decade, and contracted by 3.5 percent in 2020, while the cost of basic foodstuffs surged.

Despite government efforts to rein in inflation, the cost of sugar was 64-percent higher in January than it was a year earlier.

Wearing a red cap over long braids, 66-year-old Sandra said she had stopped going shopping and instead turned to Miloserdie’s free food parcels.

“You can’t buy anything anymore,” said the pensioner, who did not give her last name. “Before I could afford to feed the birds but now even grain is expensive.”

“From the point of view of political consequences, the current situation does not look good,” said Igor Nikolayev, head of strategic analysis at FBK Grant Thornton.

“The risks for the authorities have increased.”

Older Russians were particularly “very sensitive” about rising prices because they brought to mind runaway inflation that followed the collapse of the Soviet Union in 1991, Nikolayev said.

He suggested the Russian government might unveil a new economic package to dampen social discontent ahead of the parliamentary polls.

“They have to do something,” added Nikolayev.

According to a recent poll by the independent Levada Centre, 43 percent of Russians do not rule out protests motivated by economic demands, a level last seen in 1998.

The study also found that 17 percent of respondents were ready to take part in those protests themselves.

Denis Volkov, deputy director at Levada, said recent protests showed that anger at the authorities was no longer limited to the marginalised opposition and that many demonstrators were motivated by economic hardship.

The protesters wanted to “express their disappointment with the authorities, concern over a lack of prospects and the dead end in which our country has found itself according to them,” Volkov wrote in the Russian edition of Forbes last month.

“Authorities have nothing to offer to those who are unhappy over their policies,” he added, pointing to “ostentatious wealth” of the Russian elites and growing divisions in society.

Eighteen-year-old Yekaterina Nikiforova, who joined pro-Navalny rallies in the Pacific port of Vladivostok, said the country was stagnating.

The political science student told AFP she could not see “any prospects of economic and political development” in Russia.

Arseny Dmitriyev, 22, who rallied on the other side of the country in the second city Saint Petersburg, struck a similar note.

The sociology graduate said he understood “how things are going for the county”.

“Just looking at the statistics I understand that real disposable incomes are falling and the quality of life is not improving”.