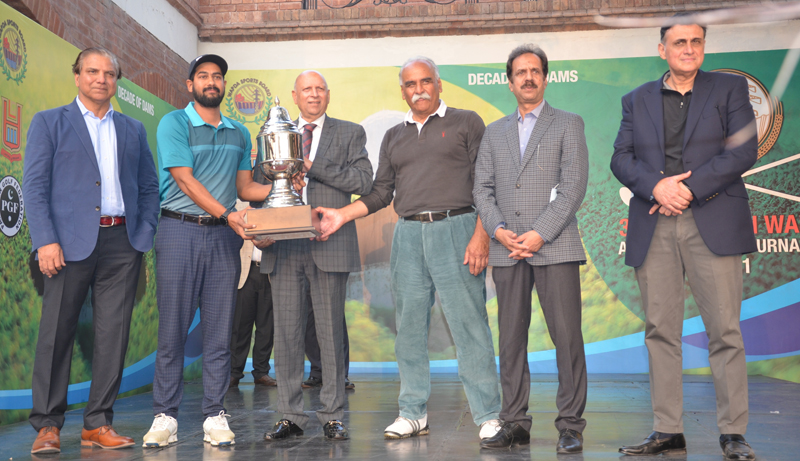 LAHORE: The 3rd Chairman WAPDA Amateur Golf Tournament came to a shortened conclusion at the Lahore Gymkhana Club Golf Course after the final round on Sunday was reduced to nine holes instead of 18 as fog prevented a timely start to the final days’ proceedings. And overall, the tournament was contested over nine holes on Friday, eighteen on Saturday and nine on Sunday which meant that the aspirants for top honours had to feel contented with 36 holes competition as against the targeted 54 holes. And the golfer of distinction turned out to be Umar Khokher of Rawalpindi, the number one ranked golf amateur of the country. Umar won the title through skillful application of golfing skills that enabled him to outsmart his resilient adversary Qasim Ali Khan of Gymkhana and also the defending champion. His scores for three days of the contest were gross 34 on Friday, 77 on Saturday and 37 on the shortened final day and a championship gross score of 148. As against this, Qasim managed scores of 39, 73 and 37 and aggregate gross for the match added up to 149, losing to the ultimate champion by a margin of one stroke.

Performance wise these two astute ones of the national golf scene proved their tenacity by playing spiritedly and were generously complimented by Chairman WAPDA Lt Gen (r) Muzzamil Hussain and Lt Gen Hilal Hussain (President of the Pakistan Golf Federation) for a wonderful performance. Damil Ataullah of Garrison Golf Club won the third gross with a three rounds aggregate score of 150. In the net category, M Nasir Irshad won the first net with an impressive score of net 139. The second net was won by Ahmed Zafar Hayat while the third net went to Muhammad Shoaib. In the invitational match, Shaukat Abbas won the first gross while the second gross went to Farhat Khan and the third to Brig Sumair Ashraf. The net section winner was Lt Gen (r) Muhammad Hilal Hussain. The dominant one in the women’s category was Suneyah Osama who played exceedingly well to win the Ladies Title. At the conclusion of the tournament, the winners were honoured by Punjab Governor Chaudhary Muhammad Sarwar.