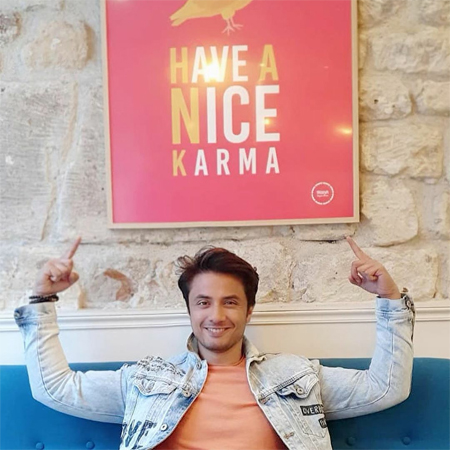 Ali Zafar is a beloved actor, writer, producer and singer who constantly entertains his social media followers with hilarious memes and comments.

Whether it’s TikTok or Twitter, Ali Zafar uses the platforms to throw witty repartees and intelligent comebacks to many who interact with him. This time his witty video that was a play on the viral ‘parry horai hai’ meme amused Minal Khan, the young and prominent actress who loved the video.

But it’s not just the video that Minal Khan and Ali Zafar had in common. The two stars also had been talking about a topic which was a public awareness and social justice initiative: bringing light to the fact that water is an essential commodity and many underprivileged families were unable to access it easily.

Ali was also all praise for a docudrama called “Paani ke Pankh” which was about the hydropower project in Pakistan. “My best wishes to Mr.Jamil Baig for the national docudrama “Paani Ke Pankh”,” he had tweeted a few days ago, “which will showcase the revival and importance of hydropower development in Pakistan.”

Minal was recently seen in the telefilm Pyaas which was directed by Wajahat Hussain and talked about the plight of young women who had to carry water through miles just to feed their families. “Shameem is a window for me to look in to the life of underprivileged women of Kohala Paien, Haripur,” she had written on her Instagram, “who walk through many miles to fetch water for their daily use. Portraying a girl who goes through all this was really a life time experience for me. “WATER” we consume daily & doesn’t realise that how precious it is for someone living nearby. “PYAAS” is a first drop to a series by @wajahathussain.syed who is aiming to highlight such issues through number of plays/ shortfilms. Good luck wajahat bhai & thank u for giving me a challenging character.i am available in all my capacity for any such opportunity next time too.”

Ali Zafar was recently seen in the viral song ‘Allay’ which he sang and created with young Urooj Fatima and breakthrough rapper Abid Brohi. Ali Zafar is also currently working on a ‘rap battle’ which has encouraged his fans from all over the world to participate in a rap competition which has cash prizes and a lot of other exciting opportunities for rappers.