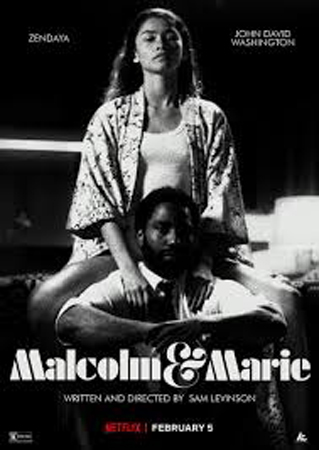 Malcolm and Marie have been bickering for well over an hour when a moment of theatrical excellence lights up an otherwise pedestrian drama about a couple having a domestic.

I won’t go into details because that would be to take the one ripe banana from the bunch, but I will say that it vividly demonstrated the impressive acting chops of Washington and Zendaya, talents which are otherwise buried beneath a mountain of verbose dialogue that isn’t half as interesting as the column inches of comment it has generated. I’ll come to that in a minute, but first an outline of the film which is now streaming on Netflix: Malcolm and Marie are a young couple returning from the premiere of Malcolm’s new film, upon which critics and peers have lavished praise.

The production company behind the movie have rented the couple a fancy modernist home, which is where all the action – such that it is – takes place. It’s around 1am. Marie is making macaroni and cheese for Malcolm who is giddy with excitement after his successful evening. He is drinking whisky and dancing to James Brown, she is quietly simmering along with the mac ‘n’ cheese. He can’t understand why she’s down in the dumps and not up on cloud nine with him.

She says it’s best left till the morning. He doesn’t want to go to bed until the air is cleared. He won’t let it drop. So, she tells him: “You forgot to thank me, Malcolm”, she says, referring to the speech he gave earlier, in which he acknowledged just about everybody who supported the making of his film except the person he considers to be the “love of my life.”

Whoops. That is a proper clanger. Plus, she’s much more than his girlfriend, it is her story that was his inspiration and the basis for his film’s strung-out protagonist whom everybody thought so “authentic”.

And yet he forgot to thank her?

Ouch! An argument ensues that goes on and on and on: a verbal boxing match with the occasional big shot but mainly padded out with glancing blows and wild swings that miss by miles. She gets the best lines, he gets to vent.

A lot. It’s a 20-minute short stretched out to a 105-minute feature film, with a narrative arc that flatlines and characters you care less about the longer it goes on.

More’s the pity. Washington and Zendaya are good actors with charisma, dynamism, presence and range. Added to which, Zendaya brings a seemingly effortless naturalism to her craft that marks her out as one to watch.

They are backed up by Sam Levinson’s neat and tidy directing, as well as his choice of shooting in black-and-white, which gives the beautifully shot film a superficial elegance to match its characters’ insecurity about how they are perceived.

It starts well. At 15 minutes the potential for a classic, claustrophobic two-hander is a distinct possibility. But sadly director-writer Levinson, whose script has Malcolm being hailed as the next Spike Lee or Barry Jenkins, is unlikely to be compared to Harold Pinter or Cormac McCarthy when it comes to the art of building psychological menace into a closed encounter.

Beyond the first act and aforementioned late scene, there is no dramatic tension, no ominous suspense, and no structural development to the endless quarrelling.

The first area of debate concerns Levinson, a white man, writing a black male character through whom he explores issues of race, specifically the experience of black creatives in Hollywood.

The second, is the singling out of a white, female film critic from the LA Times as incapable of appreciating the nuances of filmmaking and character. The accusation levelled at Levinson is for using his male protagonist as a cipher to get at Katie Walsh, a white, female film critic writing for the LA Times who gave an unfavourable review to Levinson’s film Assassination Nation.

And, thirdly, the use of highly aggressive language deployed to belittle the “white lady” film critic, “the kind of language with which female critics are far too familiar” wrote Mary McNamara, culture columnist at the LA Times. Sam Levinson has said the movie has autobiographic elements and that he wrote it very quickly after shooting on the second season of Euphoria was abruptly cancelled due to Covid and Zendaya asked him to come up with a new project. Maybe he wrote it too quickly. He certainly wrote it too long. courtesy