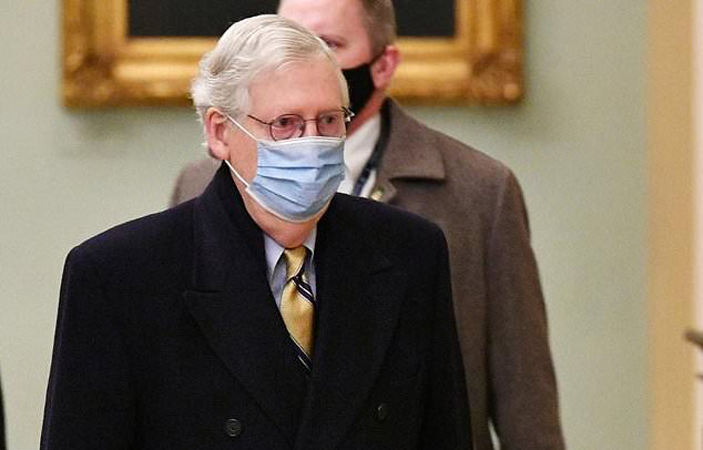 The US Senate voted Saturday to allow witnesses at the impeachment trial of Donald Trump, a surprise move likely to prolong the proceedings, even as the top Republican senator said he would vote to acquit the former president of inciting insurrection.

Republican Senate Minority Leader Mitch McConnell’s reported decision to vote to acquit means Trump is unlikely to be convicted of the charge of inciting the deadly January 6 assault by his supporters on Congress.

The Senate reconvened at 10:00 am (1500 GMT) to debate whether to allow witness testimony at the impeachment trial of the 74-year-old former Republican president.

The trial had been expected to conclude on Saturday. But in a surprise move, the lead House impeachment manager, Jamie Raskin, said he wanted to call a Republican lawmaker to testify as a witness.

That prompted a threat by Trump’s defense lawyers to call Nancy Pelosi, the Democratic speaker of the House of Representatives, Vice President Kamala Harris and other witnesses.

The Senate then voted 55-45 to allow witnesses, with five Republicans joining their Democratic colleagues.

The move sparked some confusion on the Senate floor and it was not immediately clear how many — if any — witnesses would eventually be called to testify.

Raskin said he wanted to call Representative Jaime Herrera Beutler, a Republican from Washington state, to testify after she released a statement about the events of January 6.

Herrera Beutler was one of 10 Republican lawmakers who voted to impeach Trump in the House of Representatives.

In her statement, Herrera Beutler said that Republican House Minority Leader Kevin McCarthy had called Trump while the attack was ongoing and implored him to call off the rioters.

“When McCarthy finally reached the president on January 6 and asked him to publicly and forcefully call off the riot, the president initially repeated the falsehood that it was Antifa that had breached the Capitol,” Herrera Beutler said in a statement.

“McCarthy refuted that and told the president that these were Trump supporters,” the congresswoman said.

“That’s when, according to McCarthy, the president said: ‘Well, Kevin, I guess these people are more upset about the election than you are,'” she said.

Before the call for witnesses, the trial had been expected to wrap up with final arguments and a vote on Saturday afternoon. If a decision is taken to call witnesses it could prolong the trial for an undetermined length.

Each side will have two hours each to present their closing arguments.

Trump was impeached by the Democratic-controlled House on January 13 for inciting the deadly January 6 attack on the US Capitol by his supporters, who were seeking to block congressional certification of Democrat Joe Biden’s November 3 election victory.

But a conviction in the 100-member Senate — which is evenly split between Democrats and Republicans — would require a two-thirds majority and appears unlikely after McConnell said he would vote to acquit.

Shortly before the trial reconvened on Saturday, McConnell sent an email to his fellow Republican senators.

“While a close call, I am persuaded that impeachments are a tool primarily of removal and therefore we lack jurisdiction,” McConnell said. “The Constitution makes perfectly clear that Presidential criminal misconduct while in office can be prosecuted after the President has left office.

“Given these conclusions, I will vote to acquit,” McConnell said.

Trump’s defense lawyers argued on Friday that the former president bears no responsibility for the attack by his supporters on Congress and wrapped up their presentation in just three hours.

This followed two days of evidence from Democratic impeachment managers centered around harrowing video footage of the mob assault on the Capitol.

In arguments Friday, defense lawyers called the impeachment unconstitutional and an “act of political vengeance.”

The former president’s lawyers argued that Trump’s rally speech near the White House that preceded the January 6 attack, when he told supporters to “fight,” was merely rhetorical.

Seeking to turn the table on the Democrats’ powerful use of video evidence, defense lawyers played their own compilations showing Democratic lawmakers at different times using the word “fight.”