Integrating with blue economy to ensure $1tn GDP by 2030: Masood 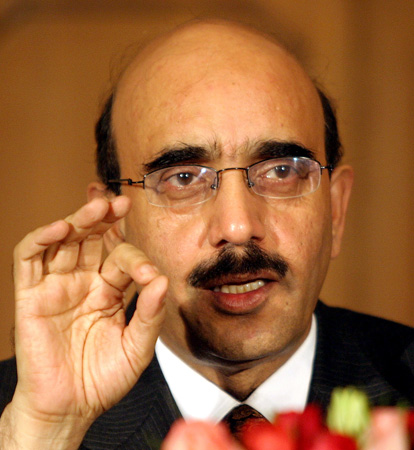 The Azad Jammu and Kashmir (AJK) President Sardar Masood Khan has said that by integrating Pakistan’s land-based economy with blue economy, the country can have $1 trillion gross domestic product (GDP) before the end of this decade.

He made these remarks while speaking at the opening session of the 9th International Maritime Conference on “The Development of Blue Economy under a Secure and Sustainable Environment – a Shared Future for Western Indian Ocean Region”.

Masood said, “We must change our mindset about Pakistan’s economy. We have a coastline of 1,000 kilometres, and a combined maritime area of 290,000 square kilometres, which includes territorial waters, contiguous zone, exclusive economic zone and continental shelf.”

He said, “We have the mindset of a landlocked country despite having abundant maritime wealth in our front yard, which connects us with the Indian Ocean region and other seas, oceans and nations. This “sea blindness” has to be addressed.”

“At present, we have the Karachi Port, Port Qasim, and Gwadar Port. But Gwadar Port, big though it is, should be seen as a beginning. We need to develop new ports and harbours at Jiwani, Gadani, Ormara and Pasni, and many other points for economic and maritime security purposes,” he went on to add.

He added that besides coastal areas and territorial waters, Pakistan’s Exclusive Economic Zones (EEZ) and the high seas have rich resources waiting to be exploited. The areas for exploration are oil and gas, minerals, shale, biodiversity, including food, drinkable water, animals and plants, and renewable energy etc.

He proposed to set up a commission to map out available and exploitable oceanographic resources for our Blue Economy in the EEZ and beyond. Pakistan Navy may wish to take an initiative in this regard or act as a catalyst amongst national stakeholders said that AJK president.

“The blue economy will spawn many ancillary maritime industries like tourism in the coastline and baseline areas, which have both mesmerising natural beauty and rich cultural heritage.”

He noted that nearly 95 per cent of Pakistan’s international commerce is seaborne. Pakistan National Shipping Corporation PNSC carries slightly more than 10 per cent of the merchandise while the bulk is handled by foreign carriers.

Masood opined that de-nationalization and development of private competitor enterprises is a viable solution to build our shipping lines and ocean liners to transport freight and passengers. “Our shipping industry has to grow out of its perennial infancy and embrace this challenge, and so should the supporting institutional framework,” he added.

Enumerating dividends of the Blue Economy, he said that enhanced regional connectivity will be the biggest dividend as it will reinforce the China-Pakistan Economic Corridor and link up East, Central, West and South Asia through co-dependent infrastructure, industry and supply chains. Economic geography will define their relations rather than military competition, he added.

He expressed the view that it is important to project Gwadar as the sister port of Chabahar, Bandar Abbas and Dubai ports and other important seaports of the Gulf region, and this collaboration could extend to even Djibouti, Hambantota and even Singapore. He proposed Pakistan should take an initiative to form such a network to intertwine these ports. These ports could be corralled as ‘Peace Ports,’ he added.