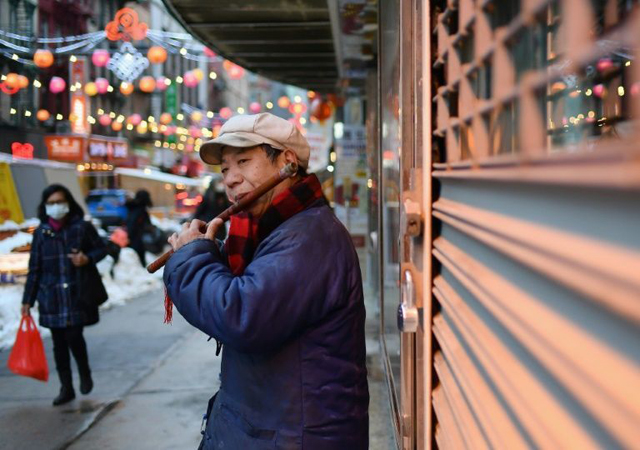 A smattering of firecrackers, the odd lion dance and a lone drummer: New York’s Chinatown turned the page on a year it was ravaged by the pandemic and virus stigmatization with subdued celebrations Friday.

No annual parade or large family gatherings greeted the Lunar New Year. Just relief at the passing of the Year of Rat and hope that the Year of the Ox will bring a turnaround in fortunes. “Of course I’m happy the year has finished,” says Jenny Li, as a slow trickle of shoppers stop at her gift store to buy lanterns, tubes of confetti and red envelopes synonymous with Chinese New Year. Li has seen takings at her shop plummet to a quarter of what they were before coronavirus struck the Big Apple almost exactly a year ago. “It was tough times. I hope for the new year that everything goes back to normal and everybody gets healthy,” the 48-year-old told AFP. The pandemic has closed thousands of businesses and restaurants across New York City, where Covid-19 has killed more than 28,000 people.

Nowhere has the pain been felt more acutely than in Chinatown, where the economic toll was compounded by misunderstandings of the virus and racism. As Covid-19, which former president Donald Trump routinely called the “Chinese virus,” spread from Wuhan around the world in early 2020, New York’s bustling Chinatown turned ghost town almost overnight. “Even before the economic impact and the crisis really hit New York City, there was a lot of xenophobia and just fear about,” recalls Olympia Moy, co-founder of the non-profit Think! Chinatown. “It just like snowballed into a really bad situation.”