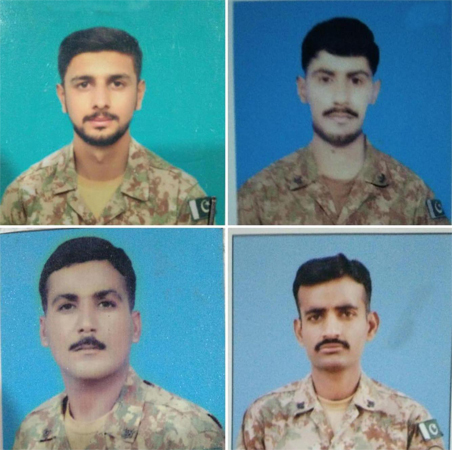 President Dr Arif Alvi condemned the terrorist attack and expressed grief over the martyrdom of army personnel. He also sympathised with the bereaved families and prayed for their strength so they can bear the loss with fortitude.

PPP Chairman Bilawal Bhutto-Zardari offered condolences for the martyred officials and expressed solidarity with their families. “The sacrifices of our martyrs will not be forgotten,” he said, adding that implementation of the National Action Plan was essential for rooting out terrorists and their facilitators.

Pakistan on Friday strongly condemned the use of Afghan soil to target Pakistan’s military personnel and civilians, after a series of recent attacks. Foreign Office Spokesperson Zahid Hafeez Chaudhri, during his weekly press briefing, said that two attacks have been launched from Afghanistan in February so far. On February 2, 15 rockets were fired from Afghan territory inside Pakistan’s Bajaur district by terrorists targeting security forces and civilians, causing material damage, he said. Similarly, on February 11, terrorists fired five rockets from inside Afghanistan in the Lagharai sector and Sarakai top in Bajaur. A five-year-old child embraced martyrdom, while seven other minors, including a girl, got injured. “Such unprovoked incidents are against the spirit of mutual cooperation and are viewed with grave concern,” he said, adding that Pakistan had taken up the issue with Afghanistan through relevant diplomatic and military channels. “Pakistan has always underscored the need to use existing mechanisms, including Afghanistan-Pakistan Action Plan for Peace and Security (APAPPS) to address all issues,” he added.