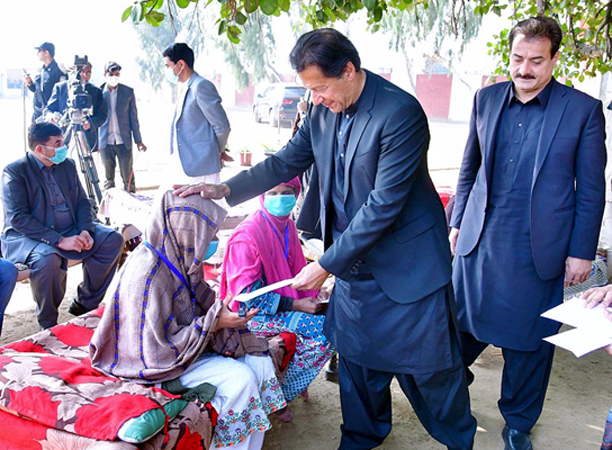 Prime Minister Imran Khan on Wednesday said horse-trading in Senate elections since last 30 years is a big question mark over the credibility of politicians who supported a corrupt system and ‘traded conscience in the name of democracy’.

“A big question lies ahead, whether to go for Senate polls with the old corrupt system or to act transparent instead,” the prime minister told reporters in response to queries on the recent video showing politicians buying and selling votes before the 2018 Senate elections. The prime minister said the corrupt practices were revealed to him after he and his party members received offers from multiple sides for selling their votes before previous Senate elections. He recalled that he was approached by different people for money who also offered funds for Shaukat Khanum Memorial Cancer Hospital as another mode of bribe. “What kind of democracy is this where votes are sold … this is nothing but a blot on the face of democracy,” he added.

He recalled that he had ousted 20 from his party who took money for votes in the last Senate elections, adding some of them also invoked the jurisdiction of the court against the action. He dismissed the allegations of the opposition regarding being in knowledge about the video way earlier, saying had he known about it, he would have presented it before court.

The prime minister said Pakistan Democratic Movement had made an alliance to protect their corruption and ill-gotten money. “The market of corruption in politics is on rise, but no other party is willing to change it,” he said, regretting that in the past, people became senators by buying votes from members of national and provincial assemblies. He said currently, the rate for a single Senate vote in Balochistan ranges between Rs 500 to 700 million, which is unfortunate. “Those involved in such extravagance will later recover by minting money from the public exchequer,” he said.

To a question on Jamiat Ulema-e-Islam chief Fazlur Rehman who advised Imran Khan to learn politics from him, he said the JUI-F chief himself was the one who most benefited from the secret ballot. Imran Khan said he had been advocating for an open ballot for the last five years. He mentioned that PML-N and PPP had earlier signed Charter of Democracy and agreed for an open ballot, however changed their minds to support their corruption. He was of the view that the ruling party can take more benefit from the secret ballot because of being in the government. “However, we want to change the system for the benefit of the country and to end corruption,” he said, adding that with corruption at leadership level, the honesty at lower tiers could not be expected.

He regretted that the political parties that were in power before him did not attempt to ‘stop such corrupt practices’, claiming that money for the votes also goes to the top leadership. “These thieves who call themselves politicians and have made a union in the PDM to protect their corruption, all of them should be questioned […] your parties have been in power for 30 years, why didn’t you try to stop it [horse trading in Senate polls]?” he said. “Do we want to hold [Senate] elections according to this same system when we know there is a money market set with rates for politicians?” the premier questioned rhetorically. He asked why the PPP and PML-N had backtracked from their stance on open balloting when it was stated clearly in their Charter of Democracy.

On inflation, the prime minister said devaluation of Pakistan currency against dollar resulted in price hike. He said during PPP government, the rupee got weaken about 25 per cent while during PTI government, rupee’s value declined by 24.5 per cent against dollar. He expressed the hope that with continuity of trend in growth of exports, the situation would be improved.

About cricket, he said though he remained unable to watch the ongoing matches of Pakistan vs South Africa due to busy schedule, however expressed commitment that efforts would be made to remove flaws in existing structure to make more talent shine.

Earlier, while addressing the Ehsaas Kifalat programme ceremony, Imran Khan said that it was the government’s responsibility to help weaker sections of the society. “The distribution of funds in the Ehsaas program has been fair and we have distributed cards only on merit,” he said, and added that the programme was clean and no one could raise a finger on the programme.