* Says 4 intermediate dams will be constructed in Koh-e-Suleman 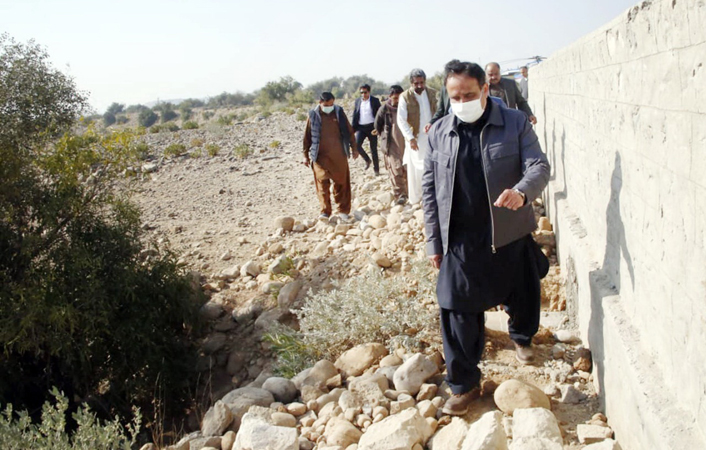 Notables of the area apprised him of the problems and needs of Sakhi Sarwar and its surroundings, and gave their suggestions. The CM listened to their suggestions and issued instructions to the authorities concern for their immediate redressal. Buzdar addressed the dignitaries in Balochi and Seraiki languages and announced a special development package for Sakhi Sarwar. He said that the problems of the people of Sakhi Sarwar will be solved and their needs will be fulfilled. He said that development package is being devised according to the needs of every district of Punjab. He announced the funds of Rs 1.25 billion have been released for preparing the feasibility report of constructing small and intermediate dams on 13 Dara.

Under a phased programme, 4 intermediate dams will be constructed in Koh-e-Suleman. Construction Work on the first dam will be started in June. Sakhi Sarwar Hospital is being upgradated at a cost of Rs 117 million. All emergency services will be provided in the emergency ward. Recruitment in Border Military Police and Baloch Levies has been approved. New police stations will be set up in the area besides providing new vehicles to the police. He also announced to give relaxation as per rules for the youth of backward and tribe area for recruitment in Punjab Police.

Usman Buzdar said that one billion rupees would be spent on the completion of Cadet College Fort Monroe. He announced to turn Fort Monroe into a tourist resort and said that instructions have been issued to Tourism Development Corporation Punjab in this regard.

Pannahgah and almonry at Darbar Sakhi Sarwar has been formally inaugurated. He said that all tribal areas connected with Ronghan to Sakhi Sarwar Road would be provided electricity. Power projects in the areas of Sakhi Serwer, Ronghan, Barthi and Koh-e-Suleman will be completed at a cost of Rs 17 crore 70 lakh. The tribal areas will be connected to the border areas of Balochistan by roads. A road from Sakhi Sarwar, Ronghan, Barthi and Taman Qaisrani to Balochistan will soon be started.

He further disclosed that government is in touch with the federation for the construction of road from Beuwatay to Kharar Buzdar. Construction of road from Fort Monro to Kharar Buzdar will provide batter transport facilitate the people of the area. Rescue 1122 Centre to be set up in Sakhi Serwer at a cost of Rs 4 crore besides providing 4 ambulances to transport patients to hospitals in Koh-e-Suleman area.

Livestock mobile clinics and dispensaries will also be established for the remote areas of DG Khan. Usman Buzdar also announced to approve Rs 5.5 crore for the water supply scheme for Fort Monro and said that every citizen of DG Khan including Sakhi Sarwar will be provided free of cost treatment facility under Universal Health Care Programme.

An agreement has been signed between NESPAK and Irrigation department for setting up small and intermediate dams in the Punjab. A special MoU signing ceremony was held in this regard in Sakhi Serwer DG Khan. Punjab Chief Minister Sardar Usman Buzdar was the chief guest of the ceremony. Head of Water and Agriculture NESPAK Tajmal Shah and Project director of Punjab Barrages Ijaz Kashif signed the MoU. Under this agreement feasibility study will be conducted for the construction of intermediate and small dams on 13 hill torrents.

Meanwhile, Buzdar visited Zain and Bharthi. He also visited boarder military police station and NADRA Registration and land record centre. He also visited the under construction Institute of Cardiology in DG Khan and inspected the construction works and expressed satisfaction over the progress made in this regard. The CM was briefed by the authorities on the progress of construction work. Usman Buzdar directed to further expedite the construction work and said that Institute of Cardiology is a gift for the people of DG Khan. Earlier, Buzdar formally inaugurated the almonry at the shrine of Hazrat Syed Ahmad Sultan Sakhi Sarwar in Sakhi Sarwer DG Khan. Khawaja Jalaluddin Rumi President DG Khan Chamber of Commerce & Industry will not only cooperate in providing food in the almonry of shrine but help in arranging food to the needy and passenger in Wahwa and Fazla Kuch.