Masood seeks US mediation on Kashmir 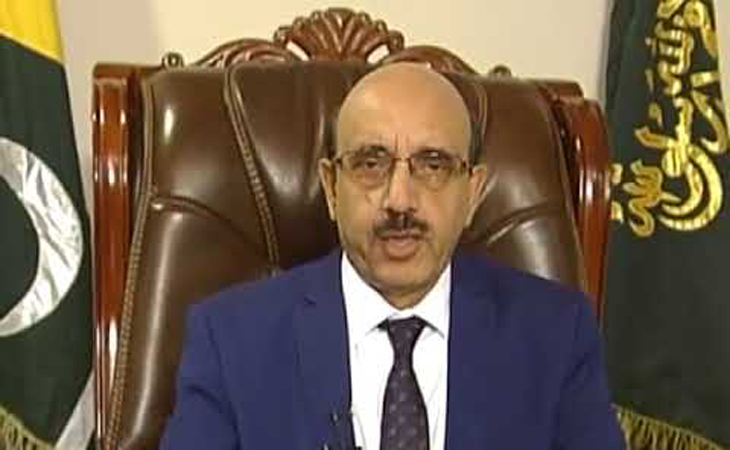 The Azad Jammu and Kashmir (AJK) President Sardar Masood Khan has said that the victory of the Joe Biden and Kamala Harris as US President and Vice President, respectively, has created a ray of hope for the oppressed people of Kashmir as both leaders have publicly spoken against the Indian brutalities and the human rights violations in the disputed territory.

The AJK president said that the people of Pakistan and Jammu and Kashmir would welcome the mediation offer of the third party for a peaceful political solution to the Kashmir issue provided the Kashmiri people are involved as the basic party in any mediation process. For this purpose, he maintained that the US president can nominate any reliable figure having global influence to act as a mediator.

He also appealed to the US president to direct his permanent representative in the United Nations to play his role in getting the UN Security Council resolutions of Kashmir implemented.

Addressing the webinar at the Pakistan High Commission in London, the state president said that around one million regular Indian troops are perpetrating the worst inhuman treatment towards the defenceless Kashmiri people. These brutalities have surpassed even the horrible incidents of ethnic cleansing of the Jews by Hitler.

The rape of women is being used as a weapon of war, and the youth demanding freedom and right to self-determination are being killed in the fake encounter, he said and regretted that the Kashmiri people are being deprived of their lands, homes, jobs, businesses and livelihood in order to starve them to death.

Sardar Masood Khan said that the Muslim majority state is being run by a non-state lieutenant governor who, under a well-planned strategy, imports Hindu citizens from all over India to settle them in the disputed territory in order to turn the Muslim majority into a minority.

He proposed to the pro-Kashmiri UK MPs to contact their counterparts in other parliaments in the world, and also urge the UK government to activate the UN Security Council for the solution of Kashmir issue as we direly need support from the international parliamentary community.

Addressing the webinar in Oslo, the AJK president said that Norway had always made efforts to ensure global peace and security and has always played its role in bringing parties to the conflict close to each other to pave the way for talks between them. Hopefully, it would play the same role on the Kashmir issue also.

Addressing two separate webinars in Denmark and Sweden, Sardar Masood Khan said that India is misguiding the world that it is fighting terrorism in occupied Kashmir. Likewise, it was describing the peaceful Kashmiri people demanding their right to self-determination as the terrorists, and is painting Pakistan as a terror-sponsor state for extending political and diplomatic support to the Kashmiri people.

However, Disinfo Lab Europe has recently exposed the false propaganda being waged by the Indian disinformation cells, he added.