* Imran Khan says once plebiscite is implemented and Kashmiris join Pakistan, the relationship will be between Pakistan and Kashmiris
* Pakistan standing for just right of Kashmiris while India acting in a rogue manner to oppress and illegally occupy Kashmir 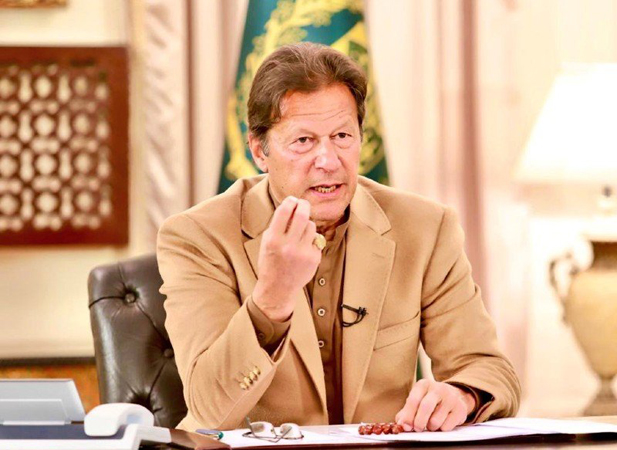 Prime Minister Imran Khan on Friday reiterated Pakistan’s stance that Kashmir dispute can only be resolved by implementing the plebiscite guaranteed in UNSC resolutions.

“Once the plebiscite is implemented, and Kashmiris join Pakistan, the relationship will be between Pakistan and Kashmiris. Let us focus on the dispute right now … that is the struggle we must keep our eye on and expose India’s behavior,” he said while addressing a huge gathering held in collection with the Kashmir Solidarity Day in Kotli. “Kashmiri aspirations are the most important thing for us. This is the difference between the two states. Pakistan standing for the just right of Kashmiris while India acting in a rogue manner to oppress and illegally occupy Kashmir,” he stressed, one again proving that Pakistan is sincere with the Kashmir cause and the lives and rights of the people of Kashmir matter to Pakistan the most.

The prime minister said that India can never win over the resolute Kashmiri people by using force, as implementation of the UNSC resolutions guaranteeing right to self-determination to them is the only solution. “The world history tells that no army could ever win over a population. When a nation stood united, it defeated even the powerful armies. The United States, a super power could not win in Vietnam… No super power could win in Afghanistan… France could not win over population in Algeria,” he said.

Reiterating his commitment to raise the Kashmiris’ voice across the world as “ambassador of Kashmir”, the prime minister said that instead of suppressing the Kashmiri people, Narendra Modi’s Hindutva ideology would destroy the Indian society. He thanked the people of Kotli for the warm reception and said he was there to remind the world community of their unfulfilled commitment of granting self-determination right to the Kashmiri people enshrined in the United Nations Security Council (UNSC) resolutions. The same UN granted right to self-determination to the Christian-majority East Timor through referendum liberating it from Indonesia, he added. He said he had reminded the UN of its commitment during his speeches at the General Assembly and would keep doing so forever until the Kashmiris got their fundamental right.

The prime minister said when the Kashmiris would decide in Pakistan’s favour using their self-determination right, Pakistan would also give them the right to choose whether to stay independent or accede to it. He assured that the whole Pakistani nation stood united in solidarity with the Kashmiris. “All the Muslims across the globe supported the Kashmir cause, even though the respective governments did not do so due to certain reasons. Even the right-minded non-Muslim people advocated granting self-determination right to the Kashmiris,” he added.

Imran Khan said Pakistan fully realised the atrocities faced by the IIOJK people, who had been sacrificing their loved ones. “To the level of my strength, I am raising your voice, be it at the United Nations, world leaders, European Union leaders, talked to ex-US President (Donald Trump) thrice to seek his role for Kashmir resolution. (I) Will raise your voice in media. Rest assure, I will raise your voice everywhere as I had committed to act as ambassador of Kashmir,” he remarked.

The prime minister said his government tried to give a message of friendship to India and make it understand that it could not win over Kashmir through oppression. He said the Kashmir people would never accept the Indian oppression through 900,000 troops as the passion of freedom was inculcated even in the newborns.

The prime minister said that following its unilateral actions of August 5, 2019, India had also lost the support of residual few Kashmiri leaders, who were now calling for freedom. No pro-India politician would ever be able to win election in the IIOJK. He said he tried to rectify ties with India through dialogue and seek the Kashmir dispute resolution under the UN resolutions as “there is no other way”.

Imran Khan said just to attract anti-Pakistan votes, Modi pre-planned the Pulwama attack and Balakot strike damaging his “much-loved” trees in Pakistan as the conspiracy had been exposed through the chat of Indian news anchor Arnab Goswami. Moreover, Indian propaganda against him and the Pakistan Army through hundreds of fake websites was also exposed by EU DisinfoLab, he added. Calling India to resolve bilateral issues with Pakistan through dialogue with the reversal of August 5, 2019 actions and grant of self-determination right to the Kashmiris as preconditions, the prime minister said Pakistan was ready to talk to India. But its quest for peace must not be misconstrued as weakness, he added.